The doctor-turned-filmmaker speaks about his debut documentary on a major commercial holiday and its dark and lasting contribution to society.

For Valentine’s Day, instead of mushy love stories, check out first-time filmmaker Utpal Kalal’s extensive new documentary, The 14th February And Beyond. The film, just under an hour, was screened at the 16th edition of the biennial Mumbai International Film Festival on 31 January 2020.

Using experts and citing news reports from India and across the world, The 14th February And Beyond looks at the global holiday which has grown to mean many things to many people. While some regard it as just a holiday of love, for others, it is a painful reminder of their single status, affecting their mental health.

The documentary very seriously examines how the holiday affects women especially, as crimes against them are on the rise in the same month. Kalal told Cinestaan.com on the phone how he chose the subject and found filmmaking in the first place. The filmmaker, who has had no formal training in the art and craft, was studying to be a doctor in general medicine when he discovered international cinema in Russia.

“I liked the [films] in India, but [what] moved me were films from Russian cinema, French cinema, and then obviously I saw many good films from Hollywood as well. I made sure that I’m going to do something. I’m going to tell human stories that inspire me. One day, I’ll inspire with my stories,” Kalal said.

Starting out, besides academics, Kalal had an interest in writing, especially poems. He and his friend, Kaustabh Manchekar, who is also part of his production company, studied films every Saturday and worked on some Russian productions, along with his medical studies.

The duo made a music video for a small Eurasian band which was received positively. They then moved on to other small projects like ad films and short documentaries. The 14th February And Beyond became their first feature-length documentary.

Kalal now lives in Udaipur, Rajasthan, but hails from a small village, Phalasia, in the state. Back when he was in school, an incident about Valentine’s Day stayed with him. He was first alerted to the holiday as a child through Hindi newspaper advertisements that said ‘apni mohabbat ka izhaar kariyein [declare your love]’.

“In Rs10, you will get to print your shayari [poem] in the newspaper,” he recalled. “Near my house, there was a family [with daughters] and some random guy did not take permission of those girls and gave the shayari in the newspaper and the newspaper didn’t confirm it and printed it. The next day, the entire buzz happened in school, that this girl’s name has come in the paper! And it turned into some sort of mental harassment for those girls.” 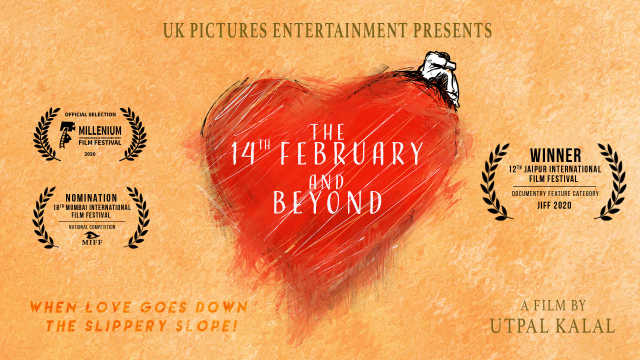 The less-than-rosy picture of Valentine’s Day continued when he moved to Kota for his studies. “Around Valentine’s Day, they have to deploy extra security just to handle this particular week,” he said. “At that moment, I was not a filmmaker. I was just observing as a part of society; it was not leaving a good impression on my mind.”

As he read up more on the festival over the years, he thought it could be explored in a documentary film.

“Two things I heard about this day... one from some hard-core right-wing people like yeh sanskriti ke liye kharaab hai [this will damage our culture]. And then what I saw was all these bad things were happening,” he said about the holiday which few were looking into.

Valentine’s Day has few historical links and, according to Kalal and his team’s research, contains a very chaotic history. “That’s how celebrations come; even if you go about many other festivals, you won’t find prominent histories about them. I [found] that BBC in 2002 reported that in the particular week of Valentine’s season in India, 'eve-teasing' incidents [a euphemism for sexual harassment] are on a high level. It happens around the particular month, the particular week,” Kalal pointed out.

“After that, we spoke with law-enforcement officers, we got more facts. In Punjab, on Valentine’s Day, on the gedi route, they have to deploy 700 policemen every year so girls can be [protected] from eve-teasers,” he continued.

That’s when he knew he had to pursue this at length. “We are going to investigate Valentine’s Day, love industries, how it’s happening, how it’s manipulating society, how it’s exploiting the feeling of love itself," the young filmmaker said. "Out of that, we made this documentary of one hour which explores Valentine’s Day socially, commercially and in many segments, nationally and internationally.”

This pursuit has led Kalal to put medicine on hold for now. The 14th February And Beyond took two years of research and a year of filming to put together. The independently produced film, which also won the Best Picture award in the Documentary Feature category at the Jaipur International Film Festival, is currently doing the festival rounds.

But that doesn’t mean Kalal can’t use his degree and knowledge in other ways. He is working on a short film based on male child sex abuse inspired by a real event in Jaipur. “We are working on a documentary as well that would bring forth the medicine system of India. We want to use our expertise as well,” Kalal said.

The 14th Febuary and Beyond