How Pran 'made up' his character's special appearances: Centenary special


Today is Pran's birth centenary. On the occasion, we look at how his dedication to the craft of acting led to a lifelong interest in the art of make-up, long before method acting became the norm.

Hollywood star Gregory Peck once famously said, “They say the bad guys are more interesting to play, but there is more to it than that — playing the good guys is more challenging because it's harder to make them interesting.”

The late Pran Krishan Sikand was a wonderful example of what Peck said. The actor, who was feted with the Padma Bhushan and the Dadasaheb Phalke award, cast a spell on audiences with his style of on-screen villainy. So strong, in fact, was his 'evil' image at one point of time that, as the legend goes, mothers across the country stopped naming their sons ‘Pran’.

In an interview with the Aaj Tak television news channel in 2004, the legendary actor said this infamy encouraged him. “As long as I was being cursed, I thought I was doing good work,” he remarked.

But it was not just his suavity and style that made the legendary screen villain's characters so memorable. A key part of the effect was his make-up and wigs. A man who entered the world of cinema hesitantly, Pran took to the art of make-up quite well.

It was not until Halaku (1956) that the actor truly got a chance to experiment with make-up. Playing the grandson of the great Mongol conqueror, Genghis Khan, Pran decided to go full pelt into the role of ruthless Mongol warlord. It would prove to be one of his best roles, and a personal favourite.

In an interview with the website rediff.com in 2000, the actor said, “Halaku is one of my all-time favourites. It was a negative role, but the film was named after the character — I was Halaku. The make-up, costumes and character were very well researched and fantastic, considering the facilities available those days.”

In Bunny Reuben’s ...And Pran, the biographer recalls that when director DD Kashyap had initially informed Meena Kumari that the role of Halaku would be played by Pran, the actress was none too impressed. But upon seeing Pran in full costume, she was left with no choice but to commend the director on the casting (pg 82-83).

Recently, veteran actor Rishi Kapoor shared a picture of the legendary villain in an appearance that would scarcely be credible if it were not given proof by Kapoor himself. The portrait had Pran looking every bit a beautiful woman as he posed in full make-up.

Need you to tell me who this person is? If someone already knows the answer through a different source, please refrain from disclosing. Let’s not spoil the suspense for others. Thank you. I give you 10/20/50 guesses. Answer coming soon!! pic.twitter.com/L1ilXZFmxc

The reason for this is simple. Bunny Reuben describes the actor’s son, Sunil Sikand, quoting his father as saying, “Film is a visual medium. If the look is not there, then you are lost.”

This phrase might sum up the tradition of actors from Dilip Kumar and Marlon Brando down to recent icons like Daniel Day-Lewis, Rajkummar Rao and the latest Oscar-winner, Joaquin Phoenix.

In his biography, Reuben goes on to describe how Pran formed friendships with his make-up artists and wig makers to get the right look for each character. Reuben quotes a famed wig maker of the time, Pandhari Juker, saying, “He would give much thought to which make-up would suit the role best. He would even ask how he could enhance the get-up. Then, according to the get-up, he would go through the library and match a moustache or beard” (pg 142-143).

A prime example would be Manmohan Desai’s blockbuster, Amar Akbar Anthony (1977). To play the suave kingpin Kishanlal, Pran decided to borrow the look of one of America's best known presidents — Abraham Lincoln. 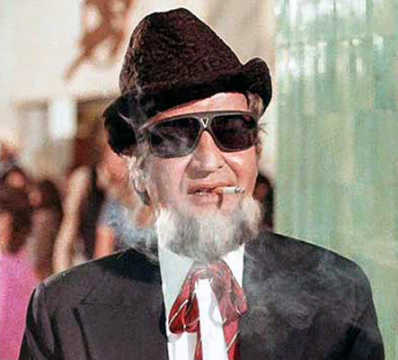 To go through his many looks would take another whole article, but suffice to say that the late Pran was a stickler for character creation. Where Amitabh Bachchan today might wax eloquent on how prosthetics improve an actor’s performance, it was his Zanjeer (1973) co-star who truly stole the show with his red-hennaed hair and beard while playing a Pathan toughie. After all, where would Amitabh Bachchan’s breakthrough film be without the baritone and the presence of the iconic Sher Khan?

This dedication to character moulding was not limited to looks. Pran was often known to embed physical habits, ticks to make his characters appear more realistic.

In the rediff.com interview quoted earlier, the actor also said, “It was I who suggested to Raj saheb [actor-filmmaker Raj Kapoor] that I run my hand across my neck repeatedly for Jis Desh Mein Ganga Behti Hai, in which I played Raaka, a dacoit. I told him a dacoit's greatest fear was that of being hanged and this could be subconsciously reflected by such a mannerism.”

At a time when actors often sleepwalked through stereotyped roles, the late Pran re-defined the limited scope of his characters in his own way. When time came for him to shift gears into more complex and developed characters, it was no surprise that he outshone others. Even today, few have come to match that splendid grace and power that Pran captured on screen.