The film, which stars Lalit Prabhakar, Sai Tamhankar and Parna Pethe, is scheduled for release on 5 June.

Medium Spicy has been in the news ever since the project was announced on account of the unique title and the new pairing of Lalit Prabhakar and Sai Tamhankar.

Now the makers have revealed the film's release date in hatke style, performing a glamorous photoshoot with leading artistes Lalit Prabhakar, Parna Pethe and Tamhankar. Medium Spicy is slated for release on 5 June. 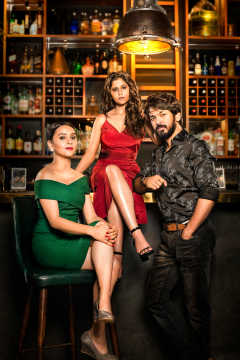 Talking about the idea of announcing a release date with a glamorous photoshoot, producer Vidhi Kasliwal said, "Tamhankar, Prabhakar and Pethe had great chemistry during the film's shooting, which is quite evident in the photoshoot also. Tamhankar, Prabhakar and Pethe's hard work and Mohit Takalkar's vision will come together to give the audience a special treat on 5 June 2020."

Director Takalkar said, "Sai, Lalit and Parna have made this film even more special. Their personality, method of acting, even their general choices are completely different and this helped a lot to make the film even more interesting."