The classic film, starring Sanjeev Kumar and Rehana Sultan, makes one think about the stifled life of a woman and how society is hell-bent on labelling her.

Written, produced and directed by the Punjabi writer Rajinder Singh Bedi, Dastak (1970) is based on his radio play Naql-e-Makaani (Moving to a New House). The play was first performed on the Lahore station of All India Radio in 1944 and features the travails of a couple as they move into a new home.

Hamid (Sanjeev Kumar) and Salma (Rehana Sultan) are a young couple who are very excited about being able to afford the rent for an apartment, a definite upgrade from the shacks they have been living in so far.

As they move into the new house, a few things strike them as odd. The strains of singing at night from red-light areas floats into their ears, but Hamid assures his wife that the area is a few lanes away. Salma is a talented singer and as she sings for her husband, there is a knock (dastak) on their door. This becomes the first of many enquiries as the couple realizes the house belonged to a courtesan, Shamshad Begum, and her customers just assume the new occupant is also a courtesan.

Soon, rumours start circulating about the couple and neighbours start prying when Salma is all alone. All kinds of people come knocking — customers, pimps, even madams seeking young flesh to put to work. Salma is beside herself with the situation. She begs Hamid to leave the house, but he feels that a solution can be found and does not want to leave.

Slowly, like a tightening noose, society and its stereotypes, hypocrisy, judgement close in upon Salma as she becomes caged in the home, her situation becoming like the mynah gifted by her husband. Only, the bird can sing, but Salma is forbidden even that as her singing would attract the nosy parkers who are convinced the beautiful young woman is a courtesan, or at least will soon become one. Under pressure, the couple start changing under the corrupting influence of the city and find themselves trapped. As the circle of vultures starts closing in on them, one elderly man Shahid (Manmohan Krishna) supports them. 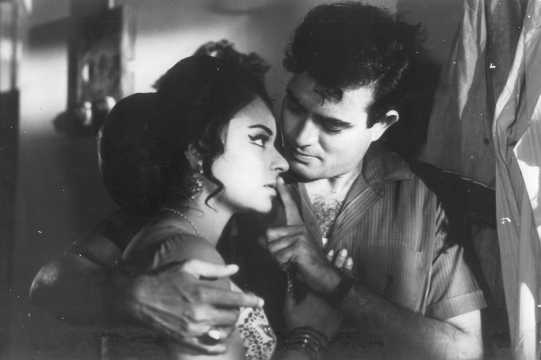 The layered and complex film weaves itself through different facets of city life. As the population swelled in Bombay, spaces became more cramped and expensive. The housing problem became central to several films which explored the crisis as it pressured newlywed couples, vying for an ounce of privacy in the city.

In a contemplation of society and its inhabitants, Dastak also urges one to think of the idea of respectability and morality. This is a recurring concern in the film. The couple is regarded as respectable initially, then seen as putting up a show. The act of singing skips around being respectable, depending on who is singing what and for whom. Similarly, Hamid, an honest and upright worker, finds himself compelled to shed his principles in dire circumstances.

The restrained performances, especially that of Rehana, portray the mental upheaval and turmoil that the characters are going through. It’s remarkable that this was the actress's debut film straight out of the Film and Television Institute of India (FTII) and she conveys thDastak makes one think about the stifled life of a woman and how society is hell-bent on labelling her, e vulnerability of the character with finesse.

Dastak makes one think about the stifled life of a woman and how society is hell-bent on labelling her, so much so that even the husband starts becoming suspicious of her. Salma is reduced to becoming her husband’s pet and has to stifle her life for vague notions of respectability. Along with this, Bedi explores the desire and sexuality of a woman who sees the world of the streetwalkers around her. This is a feature of several of his short stories where, along with looking at the plight of women, he foregrounds their desire.

The film won several National awards, including for Best Actor (Sanjeev Kumar) and Best Actress (Rehana Sultan). Madan Mohan won the award for Best Music Direction for an evocative musical score that stood out amongst the more Westernized sounds that were the flavour of the time. The film is also notable for its cinematography by Kamal Bose and editing by Hrishikesh Mukherjee.

Bedi had written the dialogues for several films and worked with filmmakers of the stature of Sohrab Modi, Bimal Roy and, most frequently, Hrishikesh Mukherjee. In 1954, he was part of the group that set up a production company called Cine Cooperative. Balraj Sahni, Geeta Bali and Amar Kumar were some of the other members. The first production of the company was Garm Coat (1955). This was followed by Rungoli (1962), where the screenplay and dialogues were written by Bedi. Dastak marked the first attempt by the writer to produce, write and direct a film.