The making of the film was joyful: Animator Shaheen Sheriff on his short Watchmaker at Time’s End


His quirky animated film is a fun look at what happens when the world turns topsy-turvy.

There is a regularity to time that brings a certain order to our lives. But what happens when time becomes whimsical? Set in Kerala, Shaheen Sheriff’s animated short Watchmaker at Time’s End looks at a world where time has become relative, throwing everything into chaos. In the midst of it all is the film’s protagonist, a watchmaker obsessed with making a piece that will keep time with time!

Speaking about the inspiration for the film, Sheriff said, “I had started learning about 3D [animation] and started looking at its possibilities. Dynamic light and shadow is better achieved in that [3D], so I tried to make a story completely revolving around light and shadow and thought what if days and nights keep changing, time keeps changing, how does that affect the lives of people? So that was the initial idea and I started working on it more and more.”

The notion of destabilised time came from an image that Sheriff had in his mind, which became a base for the film, “I had an image in my mind of some person walking along and the moon and sun setting and rising erratically. So based on that I worked my way backwards,” he said.

The film also features a unique sound design, with people vocalizing the sounds of objects or actions on screen. Explaining his decision to use this method, Sheriff said, “In the beginning, I was thinking of getting a sound designer but when we were doing the rough cut of the movie, to see how the story looked, we used the sound design just to get our point across. But the people to whom we showed it thought that it was the final sound, so I thought that I would record it properly and put it in. I did not expect people to watch this movie, so thought that I could experiment as much as I want.” 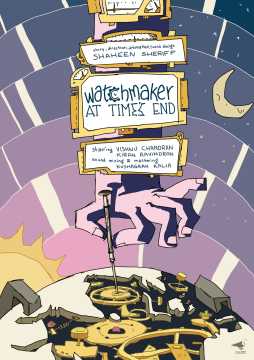 Fascinated with animation from a young age, Sheriff started out with flipbooks, “When I was a child I used to create flipbooks. I used to think that they were some mass-manufactured thing that nobody could make on their own, but one day I tried to make a flipbook and it worked and I have been learning animation slowly.” He added, “For me, whenever I try animation, I do things that are not possible in other forms. For instance, in Watchmaker itself, I heavily based it on lighting and stuff because that would be difficult to do in 2D and harder to do in live-action also, so whenever I choose a medium, be it Claymation, 2D, whatever, I try to focus on what that particular medium provides and try to push that further.

Sheriff studied at the National School of Design, Ahmedabad and is part of the six-member team that set up Ghost Animation in Kolkata.

The studio has been churning out engaging animated films that are compelling in terms of their narrative as well as visuals. Another film by the studio, Wade by Kalp Sanghvi and Upamanyu Bhattacharyya, has been screened at several film festivals across the world. “As a studio, we had four films which we screened all across India at an event called First Flight where I got to see a live audience reaction, which was very good because that is something that you don’t usually get to see when you put your film online. After that, we submitted it to festivals, and there too people responded, messaging us that they liked it a lot.”

First Flight featured the films Wade, Mother, Beyond Borders and Watchmaker: At Time's End, which were screened in venues across Pune, Delhi, Bengaluru, Kolkata, Kochi, Mumbai, Ahmedabad and other cities.

Speaking about joining the studio, Sheriff said, “Initially, we had not set ourselves up as a studio. I also joined Kalp and Upamanyu in animating Wade. Then we started doing some freelance animation projects. When these projects started getting bigger and bigger, we decided to register ourselves as a company. We are doing commercial projects to sustain ourselves and short films to enjoy [ourselves].”

Watchmaker: At Time's End is on its festival run and being appreciated by audiences. The film took five years to make as Sheriff would only work on it during his free time. Sharing his thoughts on the film’s reception, he said, “Throughout the five years of production, it was just me working on my laptop whenever I was free, so nobody even knew about this movie or that it was being made. I was just doing it for my own happiness so even if I had not released it to the public, I would have been happy with it because just the making of the film was the joy of it so whatever happened beyond that was an added bonus. I am very glad for this [reception] but I hadn’t aimed for any of this.”

Sheriff is currently working with a team on developing a game, which will bring together 2D, coding and interactive storytelling.