I had told Shakeela clearly that I will not glorify her: Indrajit Lankesh


The director opens up on his ambitious project Shakeela, a biopic of the South actress, and the experience of working with Pankaj Tripathi and Richa Chadha.

Filmmaker Indrajit Lankesh's Shakeela, a biopic of the Southern soft-porn star featuring Richa Chadha and Pankaj Tripathi, was released in theatres today. The biopic of the actress, who first gained fame (or notoreity, depending on your perspective) in the Malayalam film industry in the 1990s, has been released in five languages — Hindi, Tamil, Telugu, Kannada and Malayalam.

In an exclusive conversation with Cinestaan.com, Indrajit Lankesh spoke about Shakeela, her stardom, how he convinced her about his script, and the experience of working with Pankaj Tripathi and Richa Chadha. Excerpts:

Why a biopic of Shakeela? There were many other such actresses in her time.

Why not? After all, she was the first 'adult' star of Indian cinema. She had the highest number of 'adult' films and she was also the most popular actress at that time. In fact, we are now trying to make inroads into Asian countries, but in the 1990s Shakeela's films used to get dubbed in Japanese, Chinese, Sinhalese, all these languages.

Shakeela has a very emotional and inspiring rags-to-riches story. There is also a message [in her story] for every woman in society. Whether it is home, whether it's a workplace, women still have to deal with harassment, insults, and unfair treatment. Shakeela also had to go through all of this even when she was at the peak of her popularity. So it's a story that every woman can identify with. As a director, I felt that I should tell this story about a woman who fought her way through all adversities and made a name for herself.

How did you convince Shakeela? Did she agree immediately?

Yes, it was a challenge, but because I knew Shakeela and had worked with her in two of my films, Monalisa (2004, Kannada) and Love U Alia (2015, Kannada), in which she did character roles. it made my life easier. She trusted me as a director, so she agreed. Not just that, she opened up about her life, the hardships she had to go through in this male-dominated industry, about her success, suffering, and what she is doing now. She spoke about everything without filters and that's what made it easier for me to direct a biopic on her.

Generally, biopics try to glorify the person and cover up or ignore the negative side of their personality. What was your approach towards this biopic? 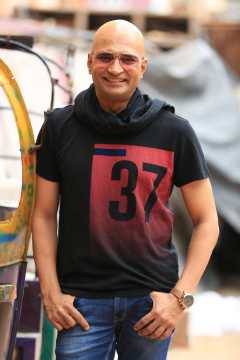 When I decided to make a biopic on Shakeela, I clearly told her that I would not glorify her. Everything is going to be close to reality and as much as I can I will try to narrate the real story of Shakeela the actress, Shakeela the woman from a poor minority community, and Shakeela today. I clearly mentioned that in no way am I going to glorify her struggle, but if in the process of narrating the story I can give a good message to society then I can say I have achieved what I set out to do through the film.

It's quite obvious that this film will be compared with The Dirty Picture (2011), the biopic of Silk Smitha. How different is your film?

It's a very different story from Silk Smitha because Silk was primarily a dancer. She was famous for her dancing and 'item' numbers. In fact, as a heroine, Silk must have done maybe nine or ten films. Whereas Shakeela was famous for her movies. At one point in time all age groups, from youth, bachelors, married men, middle-aged men, old men, rich and poor, everybody used to watch her films. They used to run for a year and there was only competition from herself because she used to do 100 films in a year. There were no theatres left for male stars when her films were released. There was insecurity among the male stars when Shakeela was at the peak of her stardom.

Did you face any difficulties in getting a censor certificate for the completed film?

Not at all. When I went to get it censored in Mumbai, there were 10 members on the committee to watch my film, and six of them were women, so I was a bit nervous, but surprisingly the women loved my film more than the men. I consider that my first victory. They even congratulated me for making such an honest biopic. In fact, Richa had gone into that character so much that one member didn't realize it was Richa. And that was a big compliment because Richa is quite a popular actress.

Speaking of Richa Chadha, how did you cast her? Because, honestly, she doesn't resemble Shakeela at all.

Getting Richa made everything easy. She is a very intelligent actor. She does her homework and always gives her best. I had seen her performances in Masaan (2015) and other films and she is fabulous in all of those. After the initial 10 minutes, you forget it's Richa, and I needed someone like her who will connect with the audience immediately.

And why Pankaj Tripathi? He is playing a South star. You could have chosen a South actor for this particular role.

On the contrary, I'm glad we got Pankaj Tripathi for this role. First of all, Pankaj is an amazing actor. He is someone who has struggled his way to the top. Today he is the most reliable actor in India. You take Gunjan Saxena, Mirzapur, Ludo, all his projects have become hits. He is now the biggest star on digital platforms. I'm happy I signed him because he is not just a brilliant actor but also an amazing human being.

What was the most challenging aspect of the biopic?

Actually, the whole film is challenging. But for me condensing Shakeela's life story in just two hours was the most difficult part because Shakeela's life has everything — extreme poverty, unparalleled success, the eventual downfall... her real-life story has got not just one but many climaxes, Now to include all that in just two hours' runtime and make it cohesive was the biggest challenge and I hope we have succeeded in it.

There were reports that Shakeela herself dubbed for Richa is one of the South Indian languages. Is it true?

No, it was a rumour. We tried a lot of things, even tried to bring Shakeela into the film, but at the end of the day, we wanted to keep it as real as possible and respect the intelligence of the audience.

When did you decide to make this film in five languages?

The decision was made at the very early stage of production. Pan-India films are the answer today. Even on OTT platforms, they provide you with language options and you can choose in which language you want to watch the show. I felt that Shakeela was the right kind of story to go pan-India because it's about a South adult star so you have to cater to all South languages and then we had two of the finest 'Bollywood' [Hindi cinema] actors on board, along with the mixture of South and 'Bollywood' technicians. Also, we had actors from Marathi, Malayalam, Kannada and other regional industries, so even before we started shooting I had decided to make it pan-India. It's a complete package of South, North, and every culture from India.

But what about the people who are not familiar with Shakeela? Do you think they will identify with the film? What's in the film for them?

For them, it will be a good film to watch. End of the day there is a message for the youth and society in general. And for the people who know about Shakeela, they will connect to it on a more emotional level. The younger generation and people who are not familiar with Shakeela will watch it as a film about an actress, a woman who made her way through a male-dominated industry with her sheer will.