The actor, who is part of the Zee Theatre teleplay Wrong Turn, recounts his theatre journey.

In the Zee Theatre teleplay Wrong Turn, actor Varun Badola plays a man, Arun, who agrees to be roped into a high-stakes mock trial with three retired lawyers where he is prosecuted one rainy night. When he agrees, he has no idea about the harsh fate that awaits him.

Directed by Ishaan Trivedi and written by Ranjit Kapoor, the suspense thriller also features Govind Namdev, Lalit Tiwari, and Lilliput Faruqui. Badola, who recently wrote the dialogues for the web-series Undekhi, spoke about the differences in acting on television versus acting on stage. He also shared his feelings on how OTT platforms have widened up possibilities for both actors and viewers. 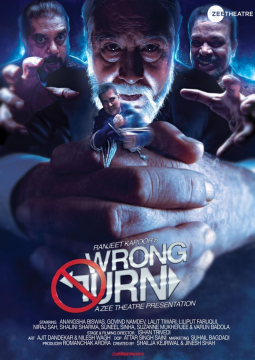 Your father Vishwa Mohan Badola was a well-known actor. You have also worked behind the camera and famously in front of it in cinema and TV, apart from exploring theatre. How different or similar was working in a teleplay?

On television or film sets, when many actors are part of a long sequence, multiple cameras can be used and a scene can be filmed twice to include every necessary detail with pan shots and close-ups. Performances can flow spontaneously in such a scenario but for a stage play, you have to choreograph movements in a contained format so the flow of the actor gets restricted. It does not feel as real as cinema in terms of the format but your performance can still be real and completely authentic. Working in a teleplay hence has been a very enriching experience, I must say.

Do you think small screen entertainment is expanding and breaking new ground because of platforms like Zee Theatre and other OTT platforms?

Yes, it is because now the viewers get many options. As do the actors. Stars still dominate projects meant for the big screen while new actors or those who obviously will never be considered as lead actors in mainstream cinema get to do very meaningful roles on the OTT platforms or even in the teleplays. I think that's just a fantastic deal for the actors especially because OTT content and teleplays are more character-centric, unlike cinema where a star is cast no matter what the demand of the role is. The possibilities are endless now as the entertainment industry breaks new ground. I think that's just fantastic.

Do share your experience as an actor in Wrong Turn. What was the most interesting part of the whole journey?

The rehearsals were the best part because, unlike in television and films, rehearsals hold a lot more meaning when you are doing teleplays. It is very enriching to rehearse with different actors to understand their process of character building and performance detailing. There is so much to learn from each other and there is a lot of interactions so the rehearsals are always the best part of doing a teleplay or theatre for that matter.

Would you like to direct a teleplay and if yes, what is that one classic or contemporary story you would like to bring to the audience?

Frankly, I am not too sure if I am equipped to direct a teleplay. I understand the medium of television and films but theatre has a completely different grammar and I don't think that I am good enough at present to direct a teleplay. Teleplays are replete with symbolism and that choreography of movement I spoke about before. Unless you are really very well versed with these technicalities, you can falter very quickly so I am not ready to take that chance just yet.

Speaking of stories, most of the plays that were written probably in the 1960s and 1970s addressed the problems of that era. Unfortunately, when you do those plays again, you realise that they are slightly outdated because society has changed so much. The classics are brilliant to read and perform but they can be altered and contemporized a bit to make them more relatable.