The actress speaks about her character’s arc in the new season, learning how to adjust to a set again in COVID times, and playing a badass character in the YouTube short The Dealer, with Ashish Chanchlani.

In the second season of Dice Media’s Please Find Attached, the relationship between Sanya, played by Barkha Singh, and Shaurya (Ayush Mehra) is put through the test as barriers come up between them at work and at home. With co-star Mehra, she creates a believable portrayal of work-life balance for couples in the engaging YouTube web-series.

Barkha Singh, who was also seen in the Netflix film House Arrest (2019) last year, spoke about the change and challenges Sanya faces this time around in her relationship as Shaurya is promoted to the post of manager. She also shared her experience working on the YouTube short The Dealer with Ashish Chanchlani for his channel and spoke about going back to a film set after the lockdown. Excerpts: 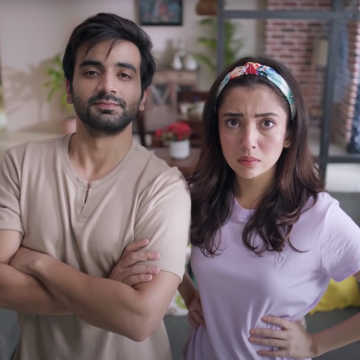 What changes does your character Sanya undergo?

Even though we have not shown much of a time gap between the first and second seasons, what’s interesting to see is how Sanya’s character arc grows gradually. This season showcases her failures and victories in both her personal and professional lives. Sanya is not an idealist; instead, she is very different and real. Her moments of self-doubt are something everyone can relate to. Her character in the show is beautifully portrayed and I was proud to play Sanya.

How would you describe the relationship and workplace dynamics in the second season?

There is a fine line between Sanya and Shaurya’s work and love lives. The simplest of decisions can get complicated: for instance, disclosing their relationship to the office or keeping a secret. For Shaurya, too, the equation with his colleagues changed when he became their manager. There were also conversations in the office that only he was privy to and could not discuss with Sanya, which led to tension between the two. All of these seemingly trivial things are a big deal for couples that live and work together, and it's interesting to see how the story pans out.

Where do we find Sanya in Season 2?

This season, Sanya is chasing her career goals and exploring possibilities where she can succeed. Like everyone who is at a crossroads in their career, she faces self-doubt, challenges at work, with the added stress of coping with her love life, and more.

This time around, what scene were you really happy to perform?

It's hard to pick just one. But I would have to say the trekking scenes and office scenes were fun to shoot.

How has the shooting experience changed after COVID-19? Were there noticeable changes in what you could or could not do?

Yes, shooting after seven or eight months was very different. While there was this excitement of coming back on the sets, there was a fair amount of adjustment that was needed. After being home all those months, I realized I had become ‘people shy’. My body had become accustomed to flexi-schedules and the hectic routine of being on set made it ache at times. Everyone on set followed maximum safety measures. The Dice Media team mandated regular screenings and PPE kits for the crew, along with physical distancing.

You have also got a new short film out, The Dealer. Can you talk about your experience filming that and why it was important to work on it?

Haha, so The Dealer was by Ashish Chanchlani and both of us had been planning to make something together for quite a long time. We were just waiting for the right video or idea to share screen space. This seemed to be it! All the credit goes to Ashish for pushing me to do this badass character while having a message at the core of the video. It was fun and the success of it was unexpected for both of us. It has broken a record for Ashish on Facebook. We are both very happy about it.