Both stars are expected to resume shooting for the project, which is still 40% incomplete, tomorrow.

Rajinikanth and Nayanthara, who are coming together for the third time for upcoming Tamil film Annaatthe, landed in Hyderabad yesterday for the remainder of the shooting. Both resume shooting tomorrow. 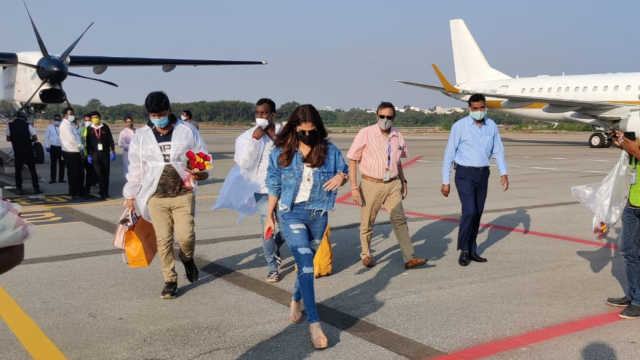 Pictures of Rajinikanth and Nayanthara from Hyderabad airport on Sunday went viral on social media. The film’s publicist confirmed that both stars had come to the city to recommence shooting for Annaatthe.

In a recent interaction with reporters in Chennai, Rajinikanth revealed that almost 40% of the film remains to be shot. In the movie, Rajinikanth will be seen playing a caring brother to Keerthy Suresh's character.

This will be the second successive project for Nayanthara opposite Rajinikanth. She had worked with him in his last release Darbar (2020), which was directed by AR Murugadoss.

Rajinikanth is expected to complete shooting for Annaatthe in about four weeks and then shift focus to his political journey. He recently announced that he would soon launch his own party and take his long-promised plunge into electoral politics.

Last week, Rajinikanth took to Twitter to reveal that he is finally ready to take the long-delayed step.

In a brief statement, he said his party would be non-corrupt, honest and transparent. He also claimed that it would win the next assembly election in Tamil Nadu, due in 2021.

He went on to add that his decision to launch a party is to bring change in Tamil Nadu. He said that if he succeeds, it will be the success of the people.