The makers have shared an animation-style poster of the film featuring Ram.

Nothing much has been revealed about the film yet, not even the director and main cast. A press note sent by the makers said the shooting would begin on 21 November and the multi-lingual film with a multi-star cast is slated for release during Diwali 2021.

Akshay Kumar’s Raksha Bandhan is also planned for release during the festival of lights next year.

The makers of Ayodhya Ki Katha also released an animation-style poster of the film. It features Ram standing with his bow, as if set to do battle. Though the poster is illustrated, the movie will be a live-action feature. This was confirmed by Nihalani. 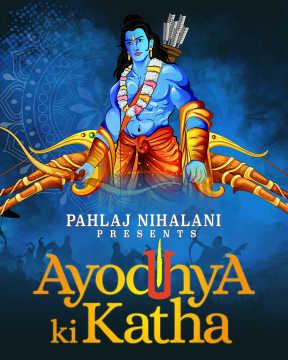 There are two more Hindi films based on Ram in the pipeline. Kunal Kohli had announced the film RamYug two years ago. Nothing is known about the cast yet except that veteran actor Dalip Tahil plays the sage Vasishtha. Kohli had said he would be casting actors who are relatively new in pivotal roles.

Actress-filmmaker Kangana Ranaut is set to produce and direct Aparajitha Ayodhya. She, too, hasn’t revealed the cast yet. The film is written by K Vijayendra Prasad, who had also scripted Ranaut’s Manikarnika: The Queen Of Jhansi (2019) and the two-part blockbuster Baahubali (2015).