It's the best time to be an actress in Hindi cinema, says Vidya Balan


Vidya speaks about her latest film Shakuntala Devi, why she felt she was ready to take up the challenge of playing the mathematics genius, and what it would take to get her to sign on for a web-series.

For most Hindi film actresses, doing a woman-centric film becomes big news. Not so for Vidya Balan. Vidya has played titular characters many times in the past decade. Rani Mukerji is probably the only other actress in Hindi cinema today who is carving a niche for herself in woman-centric films.

Vidya's latest is another film in which her character is front and centre, the biopic of genius mathematician Shakuntala Devi, which was released last week on Amazon Prime Video.

In a group interview conducted online, Vidya spoke about her preparation for Shakuntala Devi and the reasons she chose to do the film. She also spoke about her career and her choices. Excerpts:

What was your reaction when you were offered the film?

I didn’t know much about her. I knew she was a genius, was known as ‘Human Computer’ the world over, and her name is in the Guinness Book and she has made Indians proud. But I didn’t know details of her life.

I got to know once I read what Anu Menon shared with me. It was a fascinating life. She didn’t even go to school. For a person who was not schooled to be known the world over as ‘Human Computer’, for her to have written books on various subjects, is incredible. 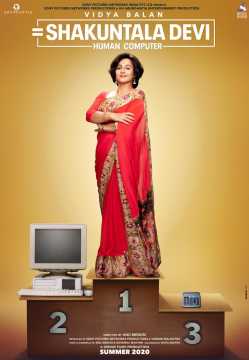 Did you meet members of Shakuntala Devi's family as part of the research? What was the process like?

Yes, I did meet [her daughter] Anupama Banerjee and her son-in-law Ajay and I have to say they were really helpful and forthcoming with details about Shakuntala Devi’s life, which is why we could make the film. Normally what happens in such cases is that it becomes a puff piece when there are family members involved, but in this case they loved her for who she was. Therefore, there was no judgement. They shared everything about her. That’s what makes a larger-than-life feel. It’s not that you are just seeing the good parts of the genius. You are seeing her for her humanness, for her flaws and shortcomings. I think that’s amazing.

What was the most challenging part about Shakuntala Devi? Was it numbers?

That wasn’t the most difficult part as I have a thing for numbers. I remember numbers quite easily. I had just forgotten as with mobile phones we don’t put our minds to use. But thanks to the film I realized I could still remember long numbers. So, I didn’t need any cue cards or prompting. It was not like there were retakes because of a mistake in numbers. Maybe once, that was about it.

But the most challenging part for me was the maths shows. Her shows weren’t straightforward maths shows. They were like magic shows. It was magic because you couldn’t figure out how she arrived at the answers. Also the style and flourish with which she did it, I was concerned about that because there are so many maths shows. We wanted to make sure it would be interesting, engaging and entertaining for people.

But when we saw her reference videos, I realized we didn’t need to externally infuse anything; it was all there. I had to just capture that essence. Then the focus was just that.

How challenging was this character for you in comparison to other roles that you have played?

I am very close to my mother. Wherever I am in the world, the first call first thing in the morning is always to my mother. But I also fight with her a lot. Now it has reduced because once I got married and left home, then you tend to calm down because you miss being in the same space.

I have also realized over time that my mother is a human being outside of being my mother. Maybe when I understood that is when this film came to me. So I think I was ready for this film.

You have carved a niche for yourself over the past decade playing central characters in female-driven films like The Dirty Picture, Kahaani, Bobby Jasoos, Begum Jaan and Tumhari Sulu.

I just want to play different characters on screen. These days, writers are writing very interesting stories for female actors where they are the central protagonist. And these films are doing well, so they are made more [often]. I think it’s a combination of everything. They are also expanding the scope of these films. And I feel so happy. I think it’s the best time to be a female actor in Hindi cinema.

Have your criteria for signing films changed over the years?

No, I think they have not changed, but I have become clearer about what I want to do. Not that I have a set of ideas of the kind of roles or films I want to do. But when something is narrated to me, there is an inner voice that speaks. If I pay attention to that inner voice, then I instinctively know I want to do this film. If that answer is no, then I don’t do it.

Sometimes you immediately form a connection with the character or you feel like I want to tell this story. Sometimes it doesn’t happen.

Previously, even when I didn’t feel like doing a role, I would do it because it was the 'right' thing to do. I don’t do that now. I think what you feel is right is what is right.

Are you open to doing web-series in the future?

If there is exciting content, for sure, because I have already received many offers, but nothing has excited me. It’s also a long-term commitment. If I am committing myself to something long-term, it has to be really mazedaar [amazing].

We all have been indoors the past few months because of COVID-19. How has this lockdown period been for you?

It was not tough because I actually spend a lot of time at home in between films. I rarely step out. I step out only for work and to meet my family. That’s about it. So I don’t find it difficult to stay at home. And this time I had Siddharth [Roy Kapur, her husband] for company, so it was fine.

Of course, doing work around the house, trying my hand at cooking, doing self-shot videos, catching up on content were the things going around.

I was enjoying watching the beach empty because [earlier] there was no place to even drop a pin. Now there are times when I feel this is my private beach (laughs). I have been counting my blessings even more than before.