The one who missed out: Shehnaz, K Asif’s original choice for Anarkali


In Shehnaz: A Tragic True Story of Royalty, Glamour and Heartbreak, Sophia Naz recounts how her mother was almost cast in K Asif's magnum opus Mughal-e-Azam (1960).

Shehnaz was a beautiful woman who was quite ahead of her time and led a glamorous life in Bombay, but who also faced tremendous pain in her personal life, being in an abusive marriage that scarred her for life.

In divorcing her husband, she lost custody of her children. Shehnaz later got married to an army doctor in Pakistan.

In the book Shehnaz: A Tragic True Story of Royalty, Glamour and Heartbreak, her daughter Sophia Naz has chronicled the life of her mother and detailed how her mother was almost cast in Mughal-e-Azam (1960) by K Asif.

Writer Ehsan Rizvi was reportedly on the lookout for a leading lady to play Anarkali in the play that he was planning to stage. He had come to the Kathak maestro Birju Maharaj and shared his predicament.

It so happened that Shehnaz was a student of Birju Maharaj, and he sent Rizvi to meet her. The writer gave her a copy of the play Anarkali, written by Imtiaz Ali Taj and published in Lahore in 1922. Shehnaz was captivated by the story of the court dancer whose heartache and yearning for freedom mirrored her own thoughts and situation.

Shehnaz's portrayal of Anarkali in the play drew K Asif to her, and he wanted to cast her in his film in the same role. What happened next is recounted in this excerpt from Sophia Naz's book:

Anarkali was a huge success. All of Bombay was abuzz with the intense emotion and longing that Shehnaz brought to the play, the beauty and sheer magnetism of her presence outshining the rest of the seasoned cast. However, while her husband had made a shrewd calculation in giving her permission to act in the play, assessing that the attendant publicity would be good for his own career and public profile, he had insisted that Shehnaz attend daily public events throughout the duration of the run.

The play was nearing the end of its three-week run and the days had been hectic. Today she was particularly exhausted. There was a knock on her dressing room door. She was used to throngs of admirers outside, bouquets or garlands in hand, waiting for autographs. The demands of such a frenzied schedule had taken their toll on her and she was in no mood to greet whoever it was outside her dressing room that day.

The knocking grew louder and more insistent. And then she heard the voices of both Ehsan Rizvi and Vijay Dalmia, the theatre owner. ‘Madam, please open the door. It’s Asif saheb. He wishes to speak to you most urgently.’ 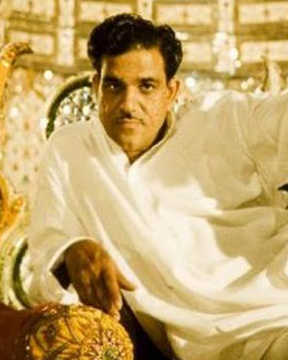 When Shehnaz finally opened the door, before her was a man with penetrating eyes, a pencil moustache and tufts of distressed hair, puffing nervously on a cigarette. As soon as he saw her, he stubbed out the cigarette on the floor, sank to his knees beside it, flung his arms wide in supplication and shouted, ‘Anarkali! I have found you at last and now I will make you the most famous woman in India for you will bring her to life in Mughal-e-Azam!’

Shehnaz was stunned. She had not anticipated this turn of events. Of course she knew who K Asif was — all of Bombay knew of the epic extravaganza that the madcap director had been filming, seemingly forever. In the opinion of many, it was a project doomed to failure. She eventually recovered her composure and stammered her protest, ‘Asif saheb, I can’t possibly act in a film!’

‘Of course, you can!’ he boomed, ‘after all you have acted in a play, haven’t you? And acquitted yourself better than many veterans of the stage.’

She hesitated to add that it was not considered respectable in the echelons of society that she belonged to. Asif was quick to grasp what she left unsaid. ‘Rest assured you’ll be treated like my sister. I won’t even let the shadow of a scandal fall upon you,’ he placed a hand over his heart theatrically. The pleas and protestations continued until she gave in and agreed to appear for a screen test the following Monday at Mohan Studios.

It was a particularly stultifying day in mid-June and she had opted for the lightest of silk chiffon sari in a dusty-rose hue. The year was 1952, she had been married for a little over a year and had cut her thick tresses fashionably short. She rose early to set her hair in rollers so that the curls framed her face just so. Throughout the photo session and screen test, Asif was solicitous and made sure she was comfortable. At the end of the shoot he smiled, ‘That was lovely, now I would like to shoot again, this time in full costume.’

Sohrab Rangoonwala, the production assistant, protested, ‘Asif saheb, that is impossible! There isn’t enough time to stitch such an elaborate costume!’

The director did not miss a beat. ‘Let her wear what she wore in the play,’ he shrugged nonchalantly.

‘Actually, that was not a costume,’ Shehnaz interjected, ‘that was my Bhopali joda, the threads are all real silver and gold.’

‘Even better,’ Asif crowed delightedly, ‘Nothing like the real thing!’

The elaborate Mughal arches of the sets were illusions, but the woman on those sets was comfortable in her own familiar attire and radiated a regal yet subtle sensuality. Shehnaz recited the monologues she had memorized from the play. Asif was delighted with her impeccable Urdu and flawless diction. These two qualities alone made her perfect for the role of Anarkali. The litmus test would be her photogenicity in the studio portraits. When he saw her close-ups with the iconic feather grazing her cheek, Asif was ecstatic at having struck gold after so many false starts.

Asif ’s quest for the perfect leading lady for his magnum opus had taken many twists and turns. The project had started in 1946, before Partition, and in the beginning, he had cast Chandra Mohan, DK Sapru and Nargis in the roles of Akbar, Salim and Anarkali, respectively. The director had acquired a reputation as an eccentric, quixotic figure with an unpredictable temperament who was making the most expensive picture ever filmed in the Indian subcontinent, with a cast of thousands, and walked around with little more than chillar, loose change, in his pocket.

Just before his friend, the playwright Ehsan Rizvi, whom he hired later as one of the writers in his production of Mughal-é-Azam, invited him to see Shehnaz play the role of Anarkali in the theatre, he had offered the role to Suraiya. However as soon as he witnessed Shehnaz’s performance, he was convinced that he had found the perfect vessel in which to pour his cinematic dream. He had shown the photographs taken on the set to his producer, Shapoorji Pallonji, and secured an appropriately princely sum to offer the Bhopali princess. He patted the wad of cash in his breast pocket, cleared his throat and knocked on Shehnaz’s door.

As luck would have it, that very morning Shehnaz’s brothers, the older Alim Mian and the younger Ghani Mian, had arrived in Bombay on an impromptu visit. They were on their way to a hockey match that featured their famous home team, the Bhopal Wanderers. They were having tea with her when Asif burst in waving the studio photos.

The timing could not have been worse.

‘You will be the most famous actress in India!’ Asif proclaimed breathlessly to the consternation of her brothers. Without further ado, he spread the photos on the coffee table. There, right under their noses, was their sister, posing on a movie set!

Alim Mian picked up one of the photographs and ripped it to shreds. ‘How dare you!’ he bellowed at the stunned Asif. ‘Get out! Now!’ Both the brothers advanced menacingly towards the terrified director.

He left without another word.