45 years of Sholay: Why the film remains a gold standard in Hindi cinema


Ramesh Sippy's cult classic Sholay, released on Independence Day in 1975, is as beloved now as it was 45 years ago.

Sholay (1975) arrived in a significant year for Hindi cinema. Not only did it cement Amitabh Bachchan's 'Angry Young Man' image and his status as Hindi cinema's new superstar, but it also made legends of all those who were associated with it.

The masala film was the complete embodiment of Indian cinema. It contained all the elements required for success — drama, humour, romance, action, suspense, sacrifice, honour, music — all packed into one entertaining package. Forty-five years after its release, the film is still held up as the gold standard in Hindi cinema.

Sholay's eventual success story is also like a fairy tale. There was tremendous pressure on the team before the release, as it was the most expensive film made in India then, with a production cost of Rs3 crore. But fortunately, in its first run, the film grossed around Rs25 crore, over eight times its production cost.

The film eventually ran continuously for five years at Sohrab Modi's Minerva talkies in Bombay and was re-released in 3D in 2014. Despite its runtime of over three hours, the film continues to resonate with audiences and fans. On its 45th anniversary today, we examine why the film remains a cult classic and dear to cinephiles even now.

The Midas Touch of Salim-Javed

The writing team of Salim Khan and Javed Akhtar developed a germ of an idea — an army officer enlists the help of two former officers to seek revenge for his family’s massacre — into arguably the greatest Hindi film of all time. Of course, the end result was because of collaborative filmmaking, but the initial boost was all Salim-Javed.

After having been passed over by Manmohan Desai and Prakash Mehra, the duo turned to the producer GP Sippy and his son Ramesh, who had already delivered two hits, Andaz (1971) and Seeta Aur Geeta (1972). Within a month, they etched out a script with distinct characters and a slightly different plot from the original idea. The rest, as they say, is history.

But as Diptakirti Chaudhuri states in the book Written by Salim-Javed, 'Salim-Javed's influence on Sholay extended way beyond the pages of the script. They attended the shooting in Bangalore regularly and often fine-tuned dialogues and scenes during filming.

'In addition to their involvement in the shooting process, the writers exhibited tremendous skill in adding depth and nuance to the script, especially to some of the supporting characters: Ramlal, Radha, Mausi, Imam sahib, Ahmed, Kaalia, Sambha, Thakur's family, Ramgarh's residents,' Chaudhuri added.

Salim-Javed were also instrumental in creating buzz for the film ahead of its release in trade magazines. They had such faith in their own work that they issued a full-page advertisement in a trade magazine that stated: This is a prediction by Salim-Javed... Sholay ... will be a grosser of Rupees One Crore in each major territory of India.

More than that, for the first time in Hindi cinema, the names of the writers were prominently featured right by the film’s stars.

The Evergreen Music by RD Burman and Lyrics by Anand Bakshi

If the script was the heart of the film, the music was its soul. The film’s album, composed by Rahul Dev Burman, has been called the decade’s most important.

The five original songs, including the fantastic instrumental track as the film’s theme, has influences from around the world and are integral to the film. There is a song for every occasion, from a toast to friendship and a celebration of a traditional festival to the all-important dance number picturized on Helen and Jalal Agha. Bakshi, already an established lyricist, added another feather to his cap with his lyrics.

Using some talented musicians like Bhanu Gupta, Kersi Lord and Ravi Sundaram, the music director used instruments like the harmonica, guitar and mandolin to highlight the melodies. Burman himself sang on ‘Mehbooba Mehbooba’ and used only three other singers — Lata Mangeshkar, Manna Dey and Kishore Kumar — on the album to great effect.

But sensational as the songs were, they were eclipsed by another aspect on the album.

The Dialogues That Became Part of Our Lexicon

Similarly, from the antanogist Gabbar Singh's iconic lines "Kitne aadmi the?" and "Jo darr gaya, samjho marr gaya" to Basanti's "Yunki, ye kaun bola?" and Imam sahib's "Itna sannaata kyun hai bhai?", there is a dialogue to suit every scenario. It can be used in humour, in irony, and for dramatic effect everywhere — in schools, colleges, offices and at home.

Once the film began to grow in popularity, another album of just the dialogues, for 58 minutes, was released to great delight. The label Polydor sold over 500,000 records and cassettes.

Jai and Veeru, Basanti and her faithful steed Dhanno, Thakur, Gabbar Singh, Soorma Bhopali, Sambha, Kaalia... these are just a few of the characters memorialized by Salim-Javed in Sholay. Of course, the artistes who played the parts also contributed to their iconic characterization.

The main catalyst is former police officer Thakur Baldev Singh (Sanjeev Kumar) and his overriding desire for revenge against the ruthless dacoit Gabbar Singh (Amjad Khan, in his debut in a starring role). The Thakur recruits two petty criminals Jai (Amitabh Bachchan) and Veeru (Dharmendra) to help him avenge his family's massacre by Gabbar. The duo comes across the feisty tongawali Basanti (Hema Malini) and the subdued widow Radha (Jaya Bachchan) before they complete their quest.

There are other memorable characters from the angrezon ke zamane ke jailor (Asrani) to the boastful Soorma Bhopali (Jagdeep) to the citizens of Ramgarh, Rahim chacha (AK Hangal) and Ramlal (Satyen Kappu).

The main stars Amitabh Bachchan and Dharmendra grounded the film, Hema Malini entertained throughout, and Sanjeev Kumar and Jaya Bachchan were the quiet stalwarts, but it was Amjad Khan’s Gabbar Singh and his motley crew of henchmen (Mac Mohan and Viju Khote) with their one-liners that captured the public’s imagination.

The newcomer’s unique performance towered over the rest of the cast. Many others always remained associated with their Sholay characters.

The Technical Brilliance of the Crew and the Homages to Cinema 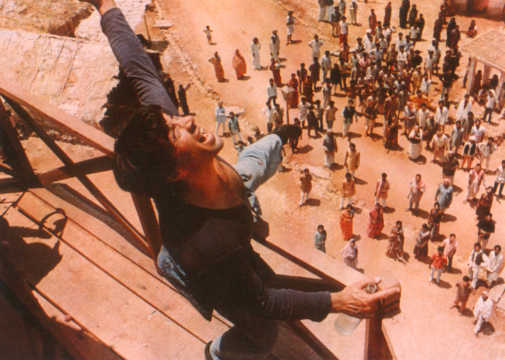 Like Orson Welles's classic film Citizen Kane (1941) at the Oscars, Sholay was also recognized for just one Filmfare award, that too for editing for MS Shinde, when it can time for laurels and accolades. But since its release, the film has been hailed as ‘the best Indian film of all time’.

Ramesh Sippy took a popular genre, the Western, and merged it with a local genre, the dacoit film, to create a movie that would be beloved over generations. It was Sippy’s third film as director and he was coming off another success, Seeta Aur Geeta (1972). But for Sholay, he and his father GP made sure no stone was left unturned.

Dwarka Divecha’s cinematography gave equal prominence to the heroes and the villain, while his camera brought the viewer right in on the action sequences. Shinde, the lone Filmfare winner, kept the action tight, over three hours and 24 minutes, keeping us on the edge of our seats until the end. Art director Ram Yedekar took a year to create the fictional town of Ramgarh at Ramanagara, near Bengaluru, Karnataka.

Sholay is also heavily influenced by both international and Indian cinema as it touches upon themes and scenes from films like Akira Kurosawa's Seven Samurai (1954), Nitin Bose's Gunga Jumna (1961) and the Westerns of Italian and American cinema. The famous water tower scene featuring Dharmendra is said to have been 'inspired' by the 1969 Hollywood film, The Secret of Santa Vittoria with actor Anthony Quinn.

Yet, unlike other films that begin to feel dated as the decades pass, this one remains timeless.