A bulletin released by MGM Healthcare said his condition had worsened and so he had been shifted to the intensive care unit.

Playback singer SP Balasubrahmanyam, who tested positive for COVID-19 on 5 August and immediately got himself admitted to hospital, suffered a setback on Thursday night and is currently in a critical condition in the intensive care unit (ICU) of MGM Healthcare, Chennai.

A bulletin released by MGM Healthcare said the veteran singer's condition had deteriorated and so he was shifted to the ICU. 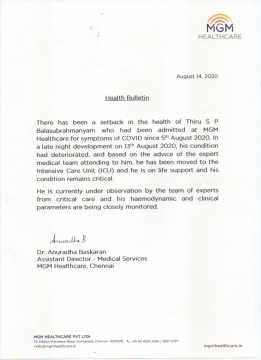 'In a late night development on 13 August, his condition had deteriorated, and based on the advice of the medical expert team attending to him, he has been moved to the ICU. He is on life support and his condition remains critical,' read the bulletin.

The report further added that SPB, as the singer is popularly known, is under observation by the team of experts from critical care and his heamodynamic and clinical parameters are being closely monitored.

After testing positive, SPB had posted a video on his Facebook wall and said that even though he was told that he could quarantine himself at home and undergo treatment, he had preferred to get admitted to hospital for the sake of his family members.

"Last two to three days I have been having a little discomfort. Discomfort means little chest congestion, which for a singer is nonsense. Phlegm forming and then cold and on and off fever. These three things, otherwise no problem. But I didn't want to take it easy, so I went to the hospital and checked. So they said it was just a mild, mild, mild, very mild positive of corona. They said you can stay home and self quarantine yourself,” the National award-winning singer wrote.

“But I didn't want to do that. It is very tough in the place with all the family. They are very concerned, they can't leave you alone. So I got admitted to the hospital," he added.