People will need persuasion to return to the theatres after the lockdown, says Rahul Puri of Mukta Arts


Puri, managing director of the firm owned by filmmaker Subhash Ghai, speaks of how the lockdown has affected the film industry and what the way ahead could be.

Mukta Arts’s Marathi production Vijeta (2020) was released just before cinema halls across Maharashtra were ordered shut in a bid to curb the spread of the COVID-19 (novel coronavirus disease) pandemic. In quick succession thereafter, a lockdown was clamped on the state and then the entire country. Hence, the film hardly had a theatrical run to speak of.

The group founded by veteran filmmaker Subhash Ghai is also facing losses as exhibitors of Mukta Cinemas. “Obviously it [the lockdown] has affected us hugely," Rahul Puri, managing director of Mukta Arts, told Cinestaan.com. "Theatres are shut across the country. Theatres are among the most badly hit businesses as there are high fixed costs in many cases. This will be a period of cost-cutting and survival for many of the smaller players.”

Puri believes it will take a while for things to return to normal even after the lockdown is lifted. “The plan once theatres are allowed to reopen would be to convince the public that these spaces are safe and sanitized so that there is confidence in coming and watching films again,” he said.

Quite a few keenly awaited films were ready for release in March, but their plans went haywire with the pandemic. Among these are Rohit Shetty’s Sooryavanshi and Kabir Khan’s multi-starrer 83.

Puri believes big-budget films are bound to clash on release once the lockdown is lifted. “It will be difficult as everyone will want to release their films due to the delay suffered and that will mean bunching of films," he said. "This is not ideal, but it is how it will be when we resume.” 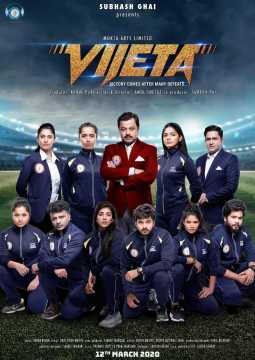 Clashes at the box office have become more common in Marathi cinema as well with as many as five films being released simultaneously on occasion. Asked whether such clashes should be avoided by an understanding among producers, as is often attempted in Hindi cinema, Puri said, “I think so. The way forward is for a dialogue which helps Marathi films get some exhibition regularly so that this kind of thing can be avoided. Marathi films have really started to grow in numbers and this has meant a lot of competition at the ticket windows.”

Puri also agreed that one of the reason for the clash could be that Marathi films are not getting the screens they would like, which means there is a bunching to avoid clashing with bigger Hindi releases.

Puri believes the current pandemic is a novel problem for the authorities and their efforts need to be applauded. “I think the governments are doing all they can and in many cases they are being over-cautious which is exactly how they should be. There is no right or wrong answer here. This is an unprecedented situation and I believe the government’s response has been spot on so far,” he said.

With consumption of content on digital platforms growing, Mukta Arts also has a digital arm for which it has some big plans. “The platform is currently developing plenty of web-series content as well as virtual reality content," the managing director said. "We will be making announcements very soon in this area.”

So, how is Rahul Puri combating the lockdown personally? “I am keeping myself busy,” he said. “Learning a few new skills like editing and web development. [I am] reading a lot and catching up on some shows that I have not managed to get around to. In addition, I am managing to build some kind of routine at home which I think helps me a lot in terms of certainty for the day ahead.”

The Mukta Arts managing director believes there is a hidden message in this crisis. “There is a strange silver lining to all this, which is that we get to slow down a bit and concentrate on what is important to us all and how we can improve ourselves in new ways,” he said, and joked, “I do hope it doesn’t last much longer though. Too much improvement may [be] hard to take.”