Rishi Kapoor played Tanwar's father in the Leena Yadav movie and the two shared many scenes.

Anirudh Tanwar made his acting debut with Leena Yadav’s Rajma Chawal (2018). He played Rishi Kapoor's son in the movie and the two had the maximum scenes together in this light-hearted drama. In other words, Kapoor was Tanwar’s first co-star.

The actor was obviously taken aback by Kapoor's death earlier in the day. Tanwar said he was woken up with the sad news. “There were missed calls from a lot of people. I then spoke to my father. Honestly, the feeling is not sinking in yet. I am speechless. He was not well and then he returned. I spent so much time with him. He was my first co-star. I feel I have lost a part of my life,” he said.

With Kapoor's death, one dear wish of Tanwar’s will remain unfulfilled. “I was recently blessed with a son. It was my wish that, no matter what, my son should meet him,” said the actor. 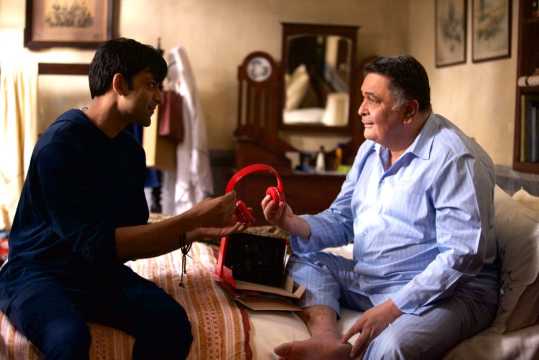 Like many fans, Tanwar, too, read the report last night about Kapoor being admitted to hospital. “I thought this might be like the last time when he was admitted in Delhi because of pollution. I never imagined this,” he said. “My prayers for him. Just 10 or 11 days ago I had seen his yoga videos. He is the only star whom I follow this much [on social media].”

Rajma Chawal saw Tanwar play Kabir Mathur, while Kapoor played his father Raj Mathur. The film is about the relationship between father and son, which becomes shaky after they migrate from a posh Delhi locality to Chandni Chowk. The film also starred Amyra Dastur, Aparshakti Khurana and Manu Rishi Chadha.

As expected, Tanwar got to learn a lot from Kapoor whom he found to be a jovial human being and someone who didn’t act his age. “I felt as if he was of my age. After falling sick, when he had gone to the US, I used to text him. I used to find him intimidating so I couldn’t just call him up. Sometimes he used to get angry and say, ‘Lol. I am chilling.’ Everybody was so comfortable with him,” remembered the actor.

The young actor added that he always liked how blunt Kapoor was in his views. “He used to easily point out what he liked and didn’t like,” he said.

During the shooting of the movie, of all the things said by Kapoor, Tanwar will always remember a couple of words of advice. “He said that if you find success, don’t go too high. And if things don’t go well, don’t fall down, but just keep following your path. The only thing important in life is that you should stay cheerful and do your work. We only have the option of working hard, not the results. He said this in between shots,” said Tanwar.

The actor said that advice came in handy for him in recent times when he got a couple of films which didn’t get off the blocks. And when he got another project, the pandemic struck and the country was locked down.