On the 150th birth anniversary of the 'Father of Indian Cinema', Mokashi shares some insights into Phalke’s character that he unravelled in the course of his research for the film Harishchandrachi Factory.

Cinema is one of the biggest passions in India. Each year, hundreds of films are made in a number of languages. This makes India's film industry one of the biggest industries in the country, although it hasn’t been given that status officially.

It was the painstaking effort of Dhundiraj Govind Phalke aka Dadasaheb Phalke that brought cinema into India. Phalke made the first Indian feature film Raja Harishchandra (1913). Today happens to be the 150th birth anniversary of Phalke, who is aptly called the Father of Indian Cinema.

Despite Phalke's huge contribution to ciniema in India, ordinary cinegoers did not know much about him until Paresh Mokashi’s Harishchandrachi Factory (2010) was released. The film, which saw Nandu Madhav play Phalke, revolved around the making of India’s first feature film, Raja Harishchandra, by Phalke with his wife Saraswati (played by Vibhawari Deshpande in the film) and two sons Bhalchandra (Mohit Gokhale) and Mahadev (Atharva Karve).

On today’s landmark occasion, Mokashi shared his insights into Phalke’s character and persona which he unravelled while researching and preparing for his film.

Mokashi admitted that his own knowledge about Phalke came from Ba Pu Watve’s biography of the filmmaker. “Like everyone, I only knew a couple of sentences about him, that he made India’s first movie and that the Dadasaheb Phalke award is given out in his name. It was this book that made me aware of the efforts put in by the Phalke family,” Mokashi said.

It is obvious that Mokashi was impressed by Phalke’s passion for cinema. But there was another quality of his that impressed him. “I liked his scientific outlook," Mokashi said. "It seems he was always into science-related things. There were scientific inventions going on around him then. He used to get attracted to that. He used to create literature and things related to science. Earlier he had opened a photography studio.”

It was this scientific approach that stoked Phalke's curiosity about cinema and drove him to make filmmaking his passion. “I think the scientist inside him was very important,” said Mokashi.

The filmmaker had decided to cast people from his theatre circle for the film. He had four or five actors in mind to play Phalke. Mokashi and Nandu Madhav had seen each other’s work in theatre, but they were not close friends. Mokashi wanted someone who could pull off Phalke's light-hearted character. “I felt Nandu was adequate for this role. I had seen a couple of his plays on similar lines. Being from the experimental theatre we all keep watching each other’s plays,” explained Mokashi. 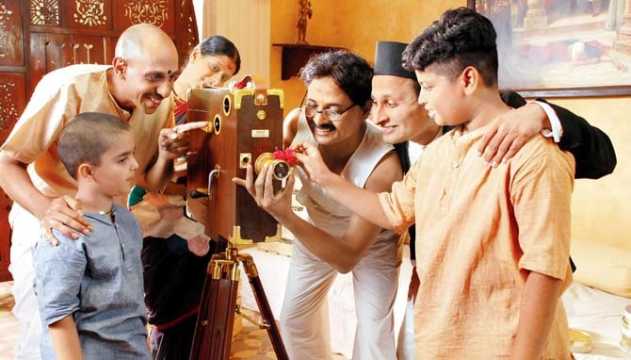 The USP of Harishchandrachi Factory was the light-hearted narrative with regular doses of laughter. Mokashi said he realized during his research that Phalke’s character had to be light-hearted, and so did his story.

“His life was filled with unusual and amusing incidents,” he said. “It started with him leaving his house to learn the arts. At the age of 16 or 17, this guy from a village like Trimbakeshwar gets enrolled at the JJ School of Arts in Mumbai. Just imagine his intelligence because even some people in Mumbai at that time would not have been aware of JJ.”

Narrating more incidents from Phalke’s life, Mokashi said, “He continued his arts education from Kala Bhavan in Baroda. People there were so impressed by his intelligence that they gifted him a camera, that too in that era. Even today if we wish to gift someone a camera, we will think a few times before deciding to spend Rs4,000 or Rs5,000. This was such a big incident for a student to receive this gift.”

While digging into Phalke's character, Mokashi learnt that after his photo studio business did not click (which is shown in the film), Phalke worked with Raja Ravi Verma’s printing press. “And before that he had learnt magic tricks from a German magician. A person having done all this can never be a serious [stern] and ordinary individual,” said the filmmaker.

The filmmaker said incidents that took place while Phalke was making his and India's first film were also funny. “Except incidents like Phalke losing his vision [for some time] and the address he lost [in London],” said Mokashi. “But people like him don’t get immersed in sorrow like us. They don’t react with tears when faced with problems.

“Plus, these people don’t even let others around them feel sad. They cheerfully come out of problems. This gives them the strength to take on the next challenge. So, I became convinced that Phalke’s character has to be one such,” said Mokashi. He believes another filmmaker might have made a more serious film out of the same subject.

To portray Phalke with such qualities, Mokashi wanted simple and natural performances from his artistes. “The film should not try hard to show that this is a story of a big personality," he explained. "We are used to melodrama. This is what we have been taught since childhood. We assume that whatever is serious or emotional is good. I had to bring them out of this and with time they all understood that such things can be expressed subtly. This isn’t seen much in our films.”

During the ending moments of Harishchandrachi Factory, the film shows that hardly anyone turns up to watch Phalke’s first movie. It is only after the team carries out promotional activities that people started coming in. Mokashi had discovered this, too, in the course of his research into Phalke. “We can find mentions of what all he did to ensure that the film reaches the people in some articles,” he said.

Harishchandrachi Factory is also known for recreating faithfully the Bombay of the early 1910s. “The entire credit goes to Nitin Desai,” said Mokashi. “It is a big thing that such a renowned person agreed to work with us. Thankfully, he did not charge the remuneration he does for Hindi films. He opened his entire godown for us. If it wasn’t for him, this film wouldn’t have looked this way. You just need to give him the year and he has everything ready.”

Harishchandrachi Factory won the National award for Best Film in Marathi and was selected as India’s official entry to the Oscars. But when the film was being made, the team was not thinking at all of the laurels its work would receive. It had a much bigger concern.

“Whether we would be able to complete the film was the only question in our minds," said the director. "Thankfully, we did complete it in time. Somehow we kept getting funds at various stages.” In that sense, there was not much difference between Phalke's making of Raja Harishchandra (2013) and the film that relived his effort.