Need to tell stories which mean something to me, says Navagat Prakash


The co-director and cinematographer of the documentary short, The Other Men In Blue, speaks about how he and his brother Tathagat set out to make this inspiring film.

Brothers and co-directors, Navagat and Tathagat Prakash joined hands for a moving documentary short highlighting the forgotten heroes of Indian sport, the blind cricket team. Aptly titled The Other Men In Blue, the 34-minute film introduces the talented players and how their unyielding passion for the game can serve as an inspiration to others.

The documentary had its world premiere at the Open Frame Film Festival last year and was screened at the 16th Mumbai International Film Festival this January. We spoke to co-director Navagat over the phone, earlier this year after the screening, about the film’s origins, its inspiring players, and what he hopes to achieve with his film. In the conversation, Navagat shared how he and his brother collaborated to put The Other Men In Blue together.

As a child, Navagat had already seen Hindi film classics like Pyaasa (1957) and Kagaaz Ke Phool (1959), thanks to his mother, who is a film buff. Initially a Physics student at Delhi University, Navagat was drawn more to the film club. When he came to Mumbai while still in college, he began working on a few documentaries associated with the Films Division.

“My whole idea was that I need to tell stories which mean something to me and which move me,” he said of his decision to work in filmmaking. Later, he assisted Aseem Sinha, filmmaker Shyam Benegal’s editor since 1994.

“I started thinking that I could be an editor. But I clearly didn’t have the patience to sit in one place and keep watching footage. Editing can be extremely meditative, and at certain times it can be slightly mundane,” he added.

Once while working on a documentary, he was asked to take the place of an absent camera operator and something just clicked. “I started enjoying the energy on shoot. It is such a great confluence. There is this tension in the air which is very palpable,” Navagat said.

It lead to him enrolling at the Film and Television Institute of India (FTII) in Pune, Maharastra where he got a degree in cinematography in 2016. Tathagat, originally a pianist, has also been in the media field for a while, working with companies like UTV, Red Chillies and Network 18.

Navagat, while working on both film and commercial projects, persuaded his brother to go in for a Public Service Broadcasting Trust (PSBT) grant which funds first-time filmmakers. He was alerted to the organisation by researching cinematography and seeing acclaimed cinematographer-filmmaker Santosh Sivan make the documentary short, A Farmer From Kuttanad (2102) for PSBT

Wanting to do something to soothe the soul, the brothers began brainstorming and landed upon a childhood memory.

“When I was eight and my brother was 12, we attended a cricket coaching camp near our house. During that [time], the first blind cricket World Cup was being organised. As it happens at such events, there’s hardly any crowd, [we] 40-odd kids, who were doing cricket coaching in the summer vacations, were taken as the audience,” he recalled.

The scorekeeper didn’t show up so Tathagat was chosen to keep score. “I clearly remember it was an India–South Africa match. The game used to be very different back then. The ball was different. The rules have evolved over the past 15-20 odd years,” Navagat said. 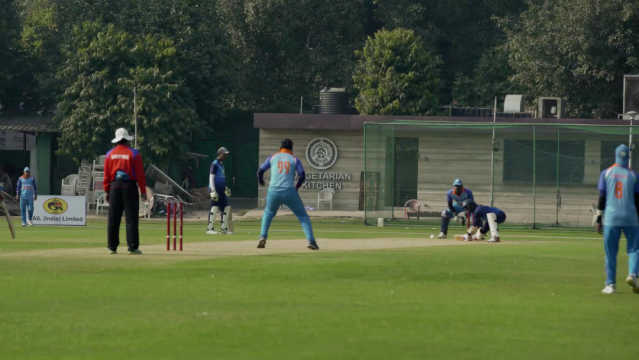 “That sound of the ball is so characteristic, and at times it can be so haunting,” he continued. “I look at cricket or cinematography or dance, all of these [as] performing arts. You have to be there in the moment, and when it’s all in the present, you need all your senses to function. And the most important sense in cricket and any performing art, mostly, is the eyes.”

The players are either partially blind or completely blind. Keeping in mind the people who they were making the film for, the brothers made an important decision by deciding to highlight the players' narratives.

“We didn’t want to make this film visual, because as a responsible, sensitive person, I’m making this film for people who are visually challenged. It is their film. So it has to be verbose. If I show how they play cricket, they can’t see that anyway. Showing each shot has no value. To me, it became a film on sound and dialogue,” he explained.

PSBT liked their pitch, while giving some helpful criticism, and the documentary took off. Shot over 14-15 days in Delhi, Haryana and Andhra Pradesh, the film hones in on players like captain Ajay Reddy, star players Deepak Malik and Rambir Singh. 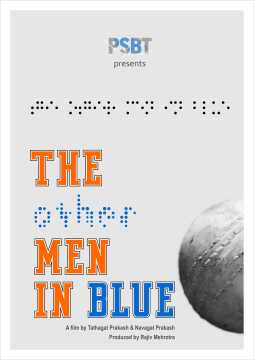 Navagat also got in touch Shailendra Yadav, the general secretary for the Cricket Association for the Blind, who became a valuable point person for the documentary. Yadav, who also coaches the women’s blind cricket team (which is material for a whole other film), introduced the players to the filmmakers.

One key point The Other Men In Blue brings up is how these accomplished champions (they’ve won every world title) are toiling away in the shadows, with little to no funding. Navagat hopes this film will draw attention to their cause. The short has support from former players like Rahul Dravid and Bishan Singh Bedi.

“I know that there will not be a people’s movement about them,” he shared. “They want to do this for life. But I want my documentary to start a dialogue, which via word of mouth, can reach the right people. I want that the documentary is seen by government officials, who are decision makers, and by people who are in power.”

The Other Men In Blue