Detective Byomkesh Bakshy! was made for the young audience: Dibakar Banerjee


Dibakar Banerjee's most ambitious project was released five years ago on 3 April 2015. The filmmaker discusses the choices he made, his plan back then for a Byomkesh 'universe' and why that might never come to be.

While the film did not do well at the box office, it has stayed in the minds of many for its fast-paced approach and especially for the shifts it made from the more common cinematic adaptations of Byomkesh Bakshi stories. The film also leaves room for different interpretations and criticisms.

Dibakar Banerjee took time out to answer all the queries Cinestaan.com put to him on the fifth anniversary of his film's release. Excerpts:

What do you feel when you look back at the film?

I don’t have much of a relationship with the films that I have already made. I have moved past them and all of them are a collection of my past mistakes. It’s not a very comfortable watch anymore. My only exposure to them is when someone sends me clips or songs from the films. Otherwise, I don’t really think much about them.

We are normally used to watching a calm and mature Byomkesh Bakshi.  What was the reason for changing the character into a restless and immature detective?

See, the perception is wrong. The first story of Saradindu’s Byomkesh Bakshi was Pather Kanta but Satyanweshi got published first from the Byomkesh canon. That’s what I remember. In Satyanweshi, he is a 24- or 25-year-old young man. Also, when Saradindu wrote the story, he was quite young! Later on, it was revived and printed again.

What I want to imply is that when you read Satyanweshi and Pather Kanta, you realize that Saradindu was very young then. Byomesk and Ajit were almost boys. They argue among themselves, Byomkesh has wrong guesses and gets outwitted too once in a while.

I feel cinema has to find the space between the written lines. For me, Byomkesh for the current generation was a mix of the allure of 1940s Calcutta and the universal characteristics of a young man. Young people are the same, whether in Shakespeare’s time or Saradindu’s time or in our generation.

It’s almost 100 years since Saradindu first started writing and the fact is that young people haven’t changed. You have read the way Byomkesh falls in love with Satyabati, though it has not been touched upon much in the film because the story is slightly different. Every story can be read in different ways.

For Byomkesh, I wanted to portray a detective coming of age, vulnerable and prone to making mistakes.

Probably this was why many people — purists, according to you — did not like the film?

See, I am never appreciated by purists. There was no star in Khosla Ka Ghosla! (2006) and nobody was picking the film up. Same happened with Love Sex Aur Dhoka (2010). I have never been accepted. Rather I am called in retrospect and told that the films have become part of a popular culture.

You also took certain cues and characters from Byomkesh stories instead of following a particular storyline of Saradindu, creating a plot of your own. Why did you do that?

Five years ago, I was trying to create a universe of Byomkesh, where characters would come and take the story forward. In my mind, I was trying to do a series, which was not heard of before.

Why did you choose Sushant Singh Rajput for the role? How was it explaining the story to him? Had he read any Byomkesh stories before he did the film?

At that point I had two or three options and Sushant was the best of them. He had read some English translations and he threw himself into the work. He did the best he could. Byomkesh had a slightly higher budget than most of my films and we had a larger plan than the budget we had allocated. We knew it would be a new kind of film. I knew in my heart that it could create controversy and would face a certain backlash, and yet, we went ahead with it.

There is a lot darkness in the frames of the film. What was the concept behind that?

I can relate 1940s Calcutta to my father’s time. It was a very paranoid city at that point of time. Also, detection flowers in the darkness. Have you seen a very brightly lit Sherlock Holmes film? There is also ample historical evidence attached to the plot, including the Japanese intrusion and all that. It was a very interesting time.

Then you juxtaposed heavy metal music with 1940s Calcutta...

It was a kind of time travel for me and my unit, going and shooting in Calcutta. But then it had to be relatable to the two young guys — Byomkesh and Ajit — and the youth audience. We wanted to create a contrast through the music.

The film is extremely fast paced and a lot was happening in it, making it hard to concentrate at times.

Very true! The film was essentially made for young people. I got most of the positive reviews from the late teens or early 20s. They loved it. However, at the same time, I admit I have made mistakes in my past films. But at the end of the day, you make it for the film, not for the audience. If the film demands its own pace, it needs to be incorporated, instead of catering to the same old demand.

Which is your favourite adaptation of Byomkesh Bakshi? 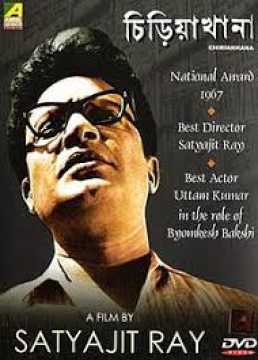 Can we expect a sequel?

We had planned for it but the film did not fare well in the theatres. I remember it was released along with Fast & Furious 7, for some strange reason. The theatrical distribution of a film in India is bogged down by so many odds. It is a miracle for a film by a new director to surprise the audience and make money. You will be surprised to know the number of screens per capita that we are left with after all the big films get allocated in the theatres.

The system of profit sharing and tactics the distributors and producers have to work with make it very difficult for theatrical films to make money — which is why we have a lot of star-based escapist cinema. However, in the last 10 years, the trend has reduced because new filmmakers are coming with a new kind of cinema and creating a fresh wave. Even then, the most star-based, escapist and laziest kind of entertainment wins out as the star system, the distribution system and the exhibition system, all work in favour of a star vehicle coming into the theatre for a few days, making a lot money and then moving on for the next venture.

As parents, when I and my wife plan to watch a children’s film with our kids, by the time we get to the theatres, it’s gone! Alternative has no room. The new, threatening or provocative project is immediately turned down. It works in favour of making society more conservative, pushing it to follow authority in a herd. Subjects that worry the authority figures are taken down and hence we see the star cast flexing their muscles and solving all the problems for two hours and then the audience is back to their own lives.

This is the environment now for Indian theatrical films. Those who are surviving on alternative films, filmmakers like Sriram Raghavan, need to be saluted. They are trying to figure out their own ways to survive and make the theatrical releases survive too. They are trying to do something without stars, with new actors, and attempting to show something critical, provocative and alternative. We have to keep fighting and figuring out a way to take care of the distributors and do things that we want to at the same time.

What are your next ventures?

My Sandeep Aur Pinky Faraar was supposed to be released in March. Now because of the coronavirus, I don’t know when it will be released, but when it is, you will see Parineeti Chopra and Arjun Kapoor’s best performances. I am also editing another film right now. I kind of wanted to reinvent myself in the pause that I took, while making Ghost Stories (2020) and Lust Stories (2018). You can always see the fruit of transformation in the works that will come out.