The journalist-turned-screenwriter speaks about the controversy surrounding Chhapaak, the responsibility of celebrities towards incidents like violence against students, and her own journey so far.

Screenwriting is not an easy job and screenwriters, more so in India, have to often struggle to get their due, both in money and popularity. Despite this, Atika Chohan gave up a thriving career as television journalist and decided to be a screenwriter. As you would have thought, her journey has not been easy.

Chohan first enrolled for a writing course at the Film and Television Institute of India (FTII) in Pune, qualifying for which is itself a task. After entering the film industry, she slowly but surely climbed the ladder and finally got her first moment of glory with the Deepika Padukone-starrer Chhapaak, a film that made plenty of heads turn, and not just because of the subject. Before Chhapaak, Chohan had also written for acclaimed films like Margarita With A Straw (2015) and Waiting (2016).

Chhapaak grabbed headlines and became a subject of primetime discussion after the film's star, Padukone, attended a protest at the Jawaharlal Nehru University (JNU) to show solidarity with the students who were attacked by political goons.

Chohan was invited last month to speak at the Screen Writers’ Association (SWA) office in Mumbai. Following the event, she spoke with Cinestaan.com about the controversy around the film and other things. Excerpts:

How important is Chhapaak in your career?

It is a very important film in my career. Plus, it was directed by one of my favourite filmmakers [Meghna Gulzar]. I have been a big fan of her. Talvar (2015) is a favourite film of mine. Obviously, it was a golden opportunity to work with her. This film has worked tremendously in my career because, as a feminist, I wanted to do such gender-based work for many years. My own stories are mostly a female narrative.

I feel the success of this film has given me a lot of validation. A lot of people keep telling me that I won’t go far if I keep doing such work, that I will get isolated and the opportunities will be limited. But because of this film I feel I have got a lot of validation that I have been doing some good work. Also, those writers who have the same belief system have got encouragement.

Do you think it was a blessing in disguise when people subscribing to a certain political ideology began trolling the film after Deepika Padukone's visit to JNU?

Actually we need to wait for a few more years and only then will we be able to make out if this was a blessing or a curse. Right now I feel the protests did not affect the film’s business. I feel it would have done the same business with or without the controversy. I feel 50 or 500 people writing against the film on social media did not change its business on the ground. Its subject was such that it could have reached only a certain number. I feel it has surpassed expectations considering the subject. 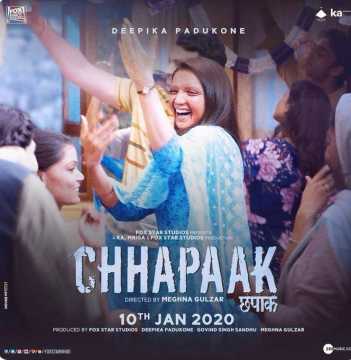 Don’t you think more famous names from the industry should raise their voices against such incidents?

I feel everyone should raise their voices against incidents like violence against students, no matter what their political perspective and which political side they are coming from. When we see such violence being meted out in front of our eyes, it is our duty to raise our voices against it. We shouldn’t politicize something like students getting beaten up or killed. And if someone is famous, it is also their duty to come out against it. This is my personal belief. [Otherwise] it will mean being complicit.

We saw how the #MeToo movement created a storm in the film industry some time back. What is its status now, according to you? Some believe the perpetrators of harassment are still frightened.

This is the type of fight that does not stop overnight. #MeToo has had an important contribution in our society with regard to gender perceptions. Today if we say we are in the post-MeToo phase and those who raised their voices have suffered, I still feel it was important to get such momentum by raising our voices. These are the kind of fights which you have to keep fighting till your last breath. It is not like, if we didn’t see any success because of #MeToo, we should now go back to our homes as feminism is over. It is not like that.

This is not a fight to raise women over men. It’s about giving women equal rights as men. This won’t be achieved unless society moves forward in a balanced way on the basis of equality. This will keep going. Maybe it is not a movement right now, but it must be brewing somewhere. Then, when it returns, it will be in an improved form. When it came the first time, there was chaos and it went here and there in an anarchic way.

But whatever damage it did, overall the #MeToo movement was a success for women. They got a big opportunity to come forward in spite of the fact that those who were exposed were rehabilitated soon by our patriarchal society. They have again started getting work in our industry or in other industries. Having said that, I feel that on the ground there has been a big change. Although not everyone, there are men who have become cautious, even though it might be due to fear [of being exposed], not because there has been any real transformation in them.

You had said in an interview that you did television writing early on because the stories you were getting in films were regressive and you didn’t want to compromise on your ideals. What would you advise upcoming writers with similar views?

I tell writers that until they have a good contract, there is no surety in the series or film on which they are working. Try to keep a day job on the side so that they don’t need to do bad compromises with their passion. You need to choose whether you want to do screenwriting for passion or livelihood. If you are doing it for passion, you need to keep a day job. Writing for passion is not going to give you quick results. This fact won’t change today, tomorrow or the day after.

You had also said some time back that some projects you wrote for at the start of your career did not begin while a few others did not get released and this worried you. Now that you have Chhapaak, Guilty and a war film, do you feel more secure?

I am feeling much more secure than before. But having said that, after spending 11 years in the industry I know we can never take our success for granted. Our success depends on our performance. If today I did well with Chhapaak, but tomorrow I don’t do well with another film, I will have to bear the negative consequences.

You did journalism with a newspaper and then a TV channel as well in Delhi. When did you feel you should give it up and try your hand at screenwriting by enrolling at the FTII?

I had realized much before that I am doing journalism only because it was my day job. It wasn’t my real passion. My real passion was always fiction writing. I used to feel vacant without the craft so I went to the FTII. Once I went there I was determined that I will only write movies. But of course it took some years to reach there.