The lockdown has, however, upset the post-production plan for her upcoming Hindi directorial debut Tribhanga, starring Kajol, Tanvi Azmi and Mithila Palkar.

The current countrywide lockdown to curb the spread of the COVID-19 (SARS-CoV-2 disease) pandemic has affected people in different ways. Some, including film stars, who were used to very busy schedules are having to cool their heels at home, unable to go out for work, for recreation or for parties.

But for actress-filmmaker Renuka Shahane, the lockdown has brought hardly any change in lifestyle. “You will find it surprising that this isn’t different for me because I normally don’t go out,” Shahane told Cinestaan.com. “I go out only if I have some work. There have been times when I haven’t gone out for three months as I love staying at home. In fact, getting me out of the house is a task!”

She added, “If I am asked to attend a party or some event in the evening, I will find a hundred excuses to skip it. So, this lockdown suits my personality.”

Shahane said that a lot of times she would be surprised to see a huge tower at a place near her house which she had never noticed before. “But the driver will say you won’t know, ma’am, as you haven’t been out for the past three months,” she said, laughing.

Many people have also given their household help leave in this period and asked them to stay at home with their own families, taking up the chores themselves. But even this isn’t a change for Shahane. “Every May and during Ganesh Chaturthi I don’t have my maid. So, I have to do everything in the house. That also I am used to,” she said. 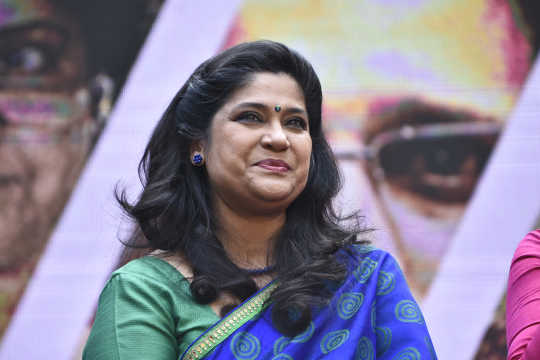 But there is one change. “I used to go downstairs and get stuff, but now I am avoiding it," she said. "I am at home only. I buy stuff to last a week or two so that we don’t have to go out often. So these things have definitely changed.”

The COVID-19 pandemic has forced everyone to wear masks. Shahane had a different interpretation for this. “Earlier we used to say don’t wear a mask in front of people," she said. "But now we are saying please wear a mask!”

Shahane is all set to present her first Hindi film as director, Tribhanga. The lockdown has stopped the film's progress. “The post-production is still going on," the director said. "Now all that is shut. It will only resume once the lockdown is lifted,” she said. The film stars Kajol, Tanvi Azmi and Mithila Palkar.

Tribhanga will be released directly on Netflix. Shahane and her producer, Siddharth P Malhotra [who directed Hichki (2018)], had approached a lot of studios to release the film in theatres, but they suggested major changes to make the film "more commercial". "The changes they suggested would have harmed the script," Shahane said. "Siddharth was firm that this has to be made the way we want.”

Unlike Shahane, her husband, veteran actor Ashutosh Rana, is not used to being at home so much. “For the first time in our entire married life he has spent this much time with us as a family," she joked. "The children are also enjoying his company because for them Papa is never at home.”

Rana was all set to release his second book, Ram Rajya, on Ram Navami (2 April), but that plan came a cropper because of the lockdown. Shahane, who has read the book, described it as “a different interpretation of Ramayana that connects with today’s generation. There are so many questions in our minds related to various incidents in the Ramayana. Like, we feel that if Ram was a god, why did he do this or that? So he has tackled those questions from a very different perspective.”

The government-owned broadcaster Doordarshan has, meanwhile, started showing re-runs of popular old serials. Shahane is not getting the time to watch them but is happy that her show Circus is among these serials. “I am happy it has got a new audience now. And those who have seen it in the past see it as nostalgia as it’s a serial of their childhood. Because of Shah Rukh Khan, a lot of people are watching it because they are curious,” she said.

She was pleasantly surprised with the feedback from younger audiences. “I get so many messages for Circus," she said. "People are saying this is such a good storyline and done so simply. They are finding it realistic and liking the characters. Today you don’t get to see such serials, except those saas-bahu sagas. Apart from this, you see mythology, paranormal stuff and crime shows.”

Shahane herself is watching South star Fahadh Faazil’s movies. “I am trying to see all the good ones like Kumbalangi Nights (2019, Malayalam), Super Deluxe (2019, Tamil), Bangalore Days (2014, Malayalam), etc. Now I will watch Trance (2020). I am enjoying watching these really good films. You get to know there is so much good work going around,” she said.

As far as books are concerned, she is reading Amanda Stern’s Little Panic. “I like psychology and I love reading things which deal with human frailties," she explained. "Little Panic is about anxiety. It’s a fascinating book.”

While Shahane is happy with the state and central government’s efforts to deal with the COVID-19 pandemic, she believes people should be careful even after the lockdown is lifted. While highlighting the dangers of the virus, she pointed out how even the more advanced Western world is in such a bad state.

“This should teach us to live with humility," she said. "Don’t have a big ego. You are nothing. You have been defeated by such a small organism which doesn’t even have a brain. That organism decides that you have to stay at home for these many days.”