Shutdown Stories: Onir is busy completing his scripts, cooking for his parents and learning new things


The filmmaker also has a word of advice for aspiring artistes: polish your skills and work, especially, on your diction.

The threat of the coronavirus pandemic has left Indians locked in their houses, those who have houses at any rate. Being home for a seemingly endless number of days can make you feel like a prisoner. But it can also provide you with plenty of opportunities to do different things. And that is exactly how filmmaker Onir prefers to see the shutdown period.

“I am keeping quite busy," Onir told Cinestaan.com when asked how he is spending the days. "Sometimes I think, shit! I don’t have enough time. I have given my maid paid leave. I told her to stay home and take care of her family. I make breakfast, lunch and do the other cooking as I live with my mom and dad and they are quite old.”

Sharing a few details of his busy day, Onir said, “After finishing cooking, all day I do my writing. I am writing my new script. In the evening, I work out for an hour in the house. I am learning Hindustani classical on the guitar. So, I spend another hour doing that. I then chat with my parents. Then I either go back to my writing or watch a web-series.”

There’s more. He has also started learning a few things for which he never had the time before. “Like doing suryanamaskar in the morning," the director revealed. "And from this week, I am planning to start learning salsa.” 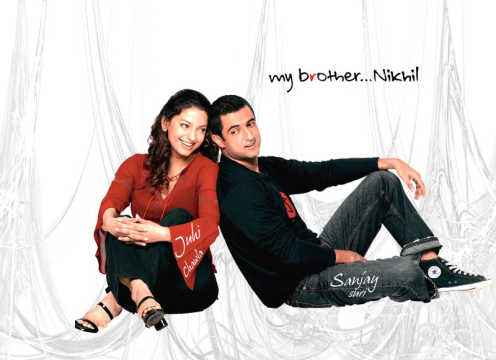 Onir made his directorial debut with the acclaimed film My Brother... Nikhil (2005). Starring Juhi Chawla, Sanjay Suri, Victor Banerjee and Purab Kohli, the film is about swimming champion Nikhil (Suri) who gets infected with HIV (human immuno virus) and has to face the consequences and the judging.

Being in love with cinema, it is but obvious that Onir would use some of the time created by the lockdown to watch a lot of content that is available on various platforms these days. “I really enjoyed watching The Spy on Netflix," the filmmaker said. "From the Indian series, the one I really liked was Jamtara. I am also visiting older films and documentaries. I saw this film recently called For Sama which was an Oscar-nominated documentary from Syria. [It was] very powerful. I also saw Manchester By The Sea (2016).”

As for what he has been writing, Onir said, “Hopefully, in the next five days I will have one script ready. Then I will start writing another because I know this [lockdown] is going to go on for some time. I want to complete these two scripts while I am at home.”

During a chat a few years ago, Onir had confessed about his admiration for the legendary filmmaker Guru Dutt. “If I have to recommend one film by Guru Dutt, I would say Pyaasa (1957),” he said.

Reading also forms an important part of Onir's day. He has just completed reading The Golden House by Salman Rushdie. “Which I really liked,” he said. “I didn’t know what it was about till I started actually reading it. While reading it, suddenly I realized that one of the things the book constantly refers to is the 26/11 attack on the Taj Mahal Hotel.

“It’s about a family which gets affected by the attack and shifts to New York and what happens with them. It’s such a gripping book about a father and three sons. It’s about how, in a way, what you do comes back to you. How, despite all the money, the family slowly falls apart. It also goes back to the era when 'Bollywood' and Bombay were largely ruled by the mafia. It’s a fascinating read.”

Another book that he has recently discovered and liked is Aristotle And Dante: Discover The Secrets Of The Universe by Benjamin Alire Saenz. “It’s a coming-of-age kind of series," Onir explained. "It was recommended by my niece. Very often I ask her for recommendations because I want to know what the young are reading. I have decided that after this I am not going to read for a while till I finish my writing.”

Moving on to his next project, Onir said he has been ready to start shooting his web-series set in Kashmir since last year but has been stymied by some reason or the other. “First the August thing [scrapping of the state's special status under Article 370 of the Constitution] happened and now this [the coronavirus pandemic and the countrywide lockdown]. I am also trying to work on a few more ideas because now is the time.”

While there are those who complain how they are unable to get much done owing to the lockdown, Onir, clearly, is one who believes in making the most of the situation. He also has a few tips for people aspiring to get into the film industry.

“I want to tell everybody, especially aspiring directors and actors, that they can do so much,” the director said. “Normally people say they don’t have time because they have to go for auditions. Now you have time. You can watch good films. You can work on your diction. Diction is one of the biggest weaknesses of most people who pursue acting. People from my industry at least have time to polish their skills.”

As for the general public, Onir believes this is a good time to learn a few things, especially for the men. “It [this period] gives people, especially the men in India, the opportunity to discover cooking and cleaning. You should also be there with your elders. In providing for the family one loses the human touch. This way one can rediscover that a family is much more than just providing sustenance,” he said.