Satyanweshi Byomkesh is a Netflix-era adaptation of a classical screenplay: Director Sayantan Ghosal


The filmmaker, who grew up on a diet of Bengali detective fiction, says those stories never left him and that is why they feature in his work again and again.

Ghosal, who has previously directed a Byomkesh web-series for an OTT platform, featuring Anirban Bhattacharya as the sleuth, discussed with Cinestaan the reasons for taking up Byomkesh for his upcoming film despite so many films having already been made on the legendary detective. He also shared his perspective on the making of the film and recalled certain memorable events from the sets. Excerpts:

Since the beginning of your career you have attempted to explore the genres of treasure hunt and thrillers. What is your inspiration for making such films?

I have been an avid reader since childhood. I have grown up reading Feluda, Byomkesh, Kakababu and other detective stories. My subject was English (Honours), but I always preferred to read Bengali literature more. I think those stories never left me and they come back in my films repeatedly.

I have always loved to visualize while reading. I used to keep thinking how to turn those stories into the visual medium. I started making short films since I was studying in class IX. Those were very amateurish productions, made with family and friends. I frankly do not remember the exact moment when I decided to become a filmmaker.

But why did you think of directing another Byomkesh film when so many have already been made? You yourself have directed one for the web platform.

This film is quite different from the other Byomkesh films. Anjan-da [Dutt] has written the screenplay of the film and hence it carries the classical essence of Byomkesh Bakshi. That screenplay has been adapted into cinema by me and my team — all of us are in our early thirties and belong to the age of Netflix. Our visualization of that classical screenplay has resulted in an interesting creation. I think the modern sensibility in terms of its making, editing, look and feel will appeal to the audience.

Some have suggested that the USP of this film is the political context of its story. What do you say?

In Byomkesh stories, he [Byomkesh Bakshi] is often sent to Delhi for certain work. However, very few stories mention what he actually does in Delhi. In the trailer, Ajit is heard saying that since the audience is more interested in the aspects of human relationships, stories of revenge, he carefully chooses not to document those details. However, we have attempted to bring alive those aspects in this film. Satyanweshi Byomkesh is set in the Calcutta of 1971, when the Bangladesh liberation war and the Naxal movement created unrest around the state and the country.

The film is based on Sharadindu Bandyopadhyay’s Mognomainak. How much did you digress from the actual text?

We only digressed according to the demands of cinematic licence. Some changes have been made to alter certain events to make them fit for cinema. Otherwise, the narrative is quite true to the text.

Anjan Dutt is the screenplay writer and creative adviser on the film. He has also acted in it. How was your experiencing of working with him both as a technician and a director?

He is extremely professional and sticks to his job while he is working. Since the time of writing the screenplay, he has surrendered himself to me as an actor and said that he would do whatever I require on screen as a director. Yes, I have taken advice from him when it was necessary for me. He has been associated with Byomkesh for so many years and has made so many Byomkesh films himself that his research was bound to enrich us.

What do you think Parambrata Chatterjee could bring to the portrayal of Byomkesh? 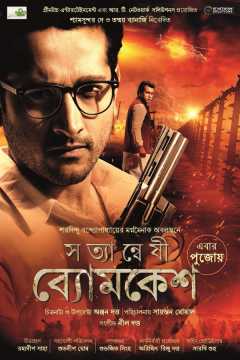 Param-da did a lot of homework and we discussed a lot regarding how we could bring something new to the mannerisms, voice modulation and way of speaking of Byomkesh. He deserves a lot of credit for that.

Can you share a memorable moment from the shooting?

Yes, there was one incident. can’t say whether it was good or bad, but I will remember it for a long time. Anjan-da wrote an extremely interesting climax, set on the terrace of a house. It was raining quite heavily the day we were shooting the climax. We were not able to shoot the scene despite repeated attempts. Anjan-da advised me to shoot the climax indoors. Had he been the director, he would have instantly taken this decision, he said. But I was bent upon shooting the sequence on the terrace. I had a minor conflict with him then. But time was passing and I eventually had to shoot the sequence inside. After some time Anjan-da came and told me, “There is no point getting so angry. At the end of the day, I want our project to do well. However, you shoot the way you want, we can reschedule it some other day.” I really liked his supportive gesture at that moment.

What do you think of the current trend of making thrillers and detective films in Bengali cinema?

I think the source lies in the treasure of Bengali literature that is filled with detective stories. I don’t think any other language has so many detective stories. These are deeply ingrained in our psyche and I don’t think this trend is ever going to go obsolete here. Thrillers and detective films can be generally watched with the entire family for entertainment. Yes, there should be socially relevant films, but that doesn’t mean it has to be a compulsion for any filmmaker. As a filmmaker, if I don’t work towards the subject of my passion and just try to meet certain demands, I don’t think I will be able to justify my works.