The poster was was unveiled at the trailer launch of Dasgupta's other upcoming film, Kedara.

Indraadip Dasgupta launched the trailer of his debut film Kedara as well as the poster of his next project Bismillah earlier this week on 23 September at the ITC Royal Bengal in Kolkata.

Besides Dasgupta,  artistes Kaushik Ganguly, Abir Chatterjee, Riddhi Sen, Bidipta Chakraborty, along with author, lyricist and screenwriter Srijato Bandopadhyay, Padmanabha Dasgupta and music director Prabuddha Banerjee were also present. The posters of both Kedara and Bismillah have been created by Ekta Bhattacharjee and her team. 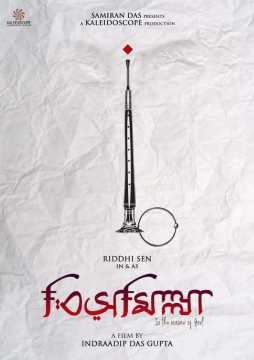 Riddhi Sen will be seen in and as Bismillah, Dasgupta’s next project, a film delineating the journey and evolution of a musician. Bismillah also stars Kaushik Ganguly, Bidipta Chakraborty, Rudranil Ghosh, Damini Benny Basu and Surangana Bandopadhyay.

Primarily known as a noted music director, Dasgupta said he has been working with sounds for more than 25 years now and his awareness regarding the sounds that are getting lost, made way for incorporating the subject of ventriloquism in Kedara.

He said at the launch, “I have been living alone for the last 10 to 12 years. The process of living alone in the beginning is quite difficult but when one gets used to the solitude, it becomes very difficult to come out of it. I have combined these two aspects in Kedara.”

Dasgupta insisted that he always attempts to present the ground reality of common people in his films - be it a love story or any other genre. Ventriloquism has almost gone extinct and hence, the people who used to practise the art, have been forgotten too and have been pushed into the category of ‘extras’, "which is wrong", he felt.

"We are no one to push anyone into the category of ‘extras’, these artistes rather cherish their own existence on their own," he continued.

On the other hand, Bismillah is about the tradition of a musical family and how foreign intrusion creates disturbance in it. “A musician not only goes through music but his or her surroundings and environment moulds him or her growth as well. With the growth, his or her music begins to take a shape and changes too," Dasgupta said.

Sen stated Bismillah is one of projects closest to his heart since Nagarkirtan. He also hinted that the film deals with the issue of communal harmony.