Filmmakers Susmit Ghosh and Rintu Thomas's documentary tells the story of the Ramsay brothers and their films that redefined horror cinema in India.

When well-known film journalist Bhawana Somaaya is asked whether the Ramsays made any contribution to Indian cinema in the documentary on the filmmakers, she responds, "No... nothing significant." It is this persistent line of thought that Sushmit Ghosh and Rintu Thomas dismantle in their documentary Kings Of Horror as they explore the craft and legacy of the first family of Indian horror.

The seven Ramsay brothers — Kumar, Gangu, Tulsi, Arjun, Keshu, Shyam and Kiran — created a niche for themselves with their small-budget horror films that featured an array of monstrous creatures. Each of the brothers specialized in different aspects of filmmaking and together they worked as a team to create films replete with the archetypes that one associates with horror in Hindi cinema — haunted havelis, graveyards, mythological symbols, occult practices, crazed characters, violence and gore.

Films like Do Gaz Zameen Ke Neeche (1972), Darwaza (1978), Purana Mandir (1984), Veerana (1988), Purani Haveli (1989), Bandh Darwaza (1990) and several episodes of the Zee Horror Show, televised between 1993 and 1998, cemented their popularity. But despite the success of their films and their dedicated audience, the filmmakers never got their due and their work was disparaged in the film press of the time. 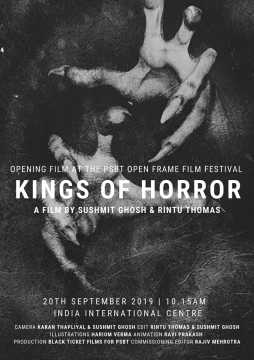 In an attempt to remedy that, Kings Of Horror features filmmakers, film historians, critics and artistes speaking about the films and their tremendous impact and afterlife in public memory. Although the film could not be screened at the Open Frame Film Festival owing to some last-minute hitch, Ghosh and Thomas spoke about their fascination with the Ramsay films and the reasons that led to the making of the documentary.

Recounting their journey, Ghosh said, "The film was made to open up the legacy of the Ramsays and, in our own way, to pay tribute to that moment of kitsch and horror.”

Though the family members were to be an integral part of the film, they chose not to be filmed. As Thomas pointed out, “They [the Ramsays] were a bit exhausted with the way the print media had written about them, in condescending, patronising ways, and did not want to come on camera [for the film].”

Faced with the absence of the Ramsays in a film about them, and driven by the dual impulse that combined a deep fascination for their films with the desire to archive stories from cinema that were not part of the mainstream discourse, filmmakers Ghosh and Thomas decided to capture the legacy of the films through conversations, making their documentary an archive of memories of the Ramsays.

However, the filmmakers were taken aback by the overwhelming response that they received from people enthusiastic to talk about the Ramsay films and that moment in Hindi cinema in particular. Highlighting this, Rintu Thomas said, “People were very interested in what comes out of this [film] and, mostly, people were very willing to talk.”

Although the film could not be screened at the current festival, the filmmakers hope to sort out the matter soon and screen the film extensively.