Atanu Ghosh on how Mayurakshi prodded him to make his trilogy


The filmmaker explains how Mayurakshi (2017), Binisutoy (2019), which is ready for release, and Robibar, for which he has begun shooting, are connected.

National award-winning filmmaker Atanu Ghosh has begun shooting for Robibar, the final instalment of his trilogy that began with Mayurakshi (2017), starring Soumitra Chatterjee and Prosenjit Chatterjee.

The second film, Binisutoy (2019), starring Ritwick Chakraborty and Jaya Ahsan. is set for release later this year. Prosenjit and Jaya Ahsan are the protagonists in Robibar.

Ghosh told Cinestaan in an interview that the backdrop for all three films is Kolkata and the protagonists belong to the generation born in the late 1970s and early 1980s. "The story of Mayurakshi is primarily the story of Aryanil (Prosenjit) who is in his late 30s or so. All these characters are urban," the director said.

According to him, this generation has been through a lot of changes. "Few generations [in India] have experienced conflict and transformation on so many levels as this one has," Ghosh said. Relationships have undergone huge changes. Divorce and alimony, which were rare terms in the 1980s, are known to almost every family today. "From there have emerged the ideas of open and live-in relationships and now it is the age of virtual relationships," the maker of films like Angshumaner Chhobi (2009) and Abby Sen (2015) added.

With the growth of internet services in the new millennium, there has been massive transformation in every field and urban middle-aged people have been struggling to cope with these changes. Therefore, consciously or subconsciously they have been plunged into a state of perpetual despair. "It is very difficult to come to terms with so many changes in such a short span of time," Ghosh said.

The trend of leaving parents at home and moving abroad to build careers and found families also gained ground with the 1970s-1980s generation. "These people might be enjoying professional success abroad, but when they come home, they feel the void they have created in their parents’ life. They start feeling helpless about the distance they have created," he said. 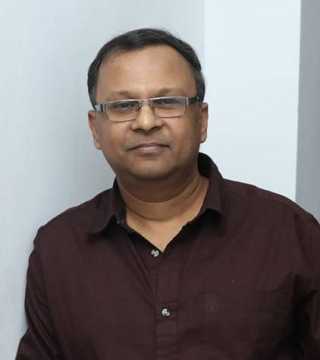 In Mayurakshi, Aryanil comes to visit his ailing father (Soumitra) in Kolkata and within a few days his life is almost turned upside down. "No matter how much despair pervades life, humans want to live and for that same reason they want to stick to someone or depend on somebody close to find the motivation," he continued.

In Mayurakshi, for Aryanil, the person to stick with is his father because he has no one else to fall back on. Through certain interactions, he begins to have a few realizations that push him on a journey of self-discovery. "After Mayurakshi, I found the inspiration to tell more stories of this kind," Ghosh said. "In Binisutoy and Robibar, the circumstances are different but there are two major characters in each and they try to find solace in each other’s company on their journey towards self-discovery."

In Binisutoy, Kajal Sarkar (Ritwick Chakraborty) and Srabani Barua (Jaya Ahsan) are strangers. Robibar’s protagonists Asimabha (Prosenjit) and Sayani (Ahsan) had had an affair 15 years ago and then parted due to conflict, misunderstanding and bitterness. They suddenly meet on a Robibar (Sunday) after many years. According to Ghosh, in all three stories, the protagonists are like mirror images of each other.

The filmmaker said he drew on people he had met in real life to sketch the characters, but the approach to and representation of the three stories are distinct. "I have had experiences related to these stories," he said. "I think there is a need to tell these kind of stories because we are getting into extreme loneliness and depression with the passing of time."

While casting for Mayurakshi, Ghosh proceeded with the script keeping Soumitra and Prosenjit in mind. The veteran actors had never featured together in a film before. Interestingly, when he decided to go on to make the trilogy, Ghosh conceived of both Binisutoy and Robibar almost at the same time.

“When I thought of casting Prosenjit as Asimabha, I felt that if the three films are watched consecutively, the audience would be able to relate with Aryanil on a different level if Asimabha and Aryanil have the same face but exhibit strikingly contrasting traits. The same goes for Binisutoy’s Srabani and Robibar’s Sayani. This is the only reason for repeating these two artistes in the two films," he said.

While choosing a cast of artistes who are already well established in the Bengali film industry, Ghosh also kept in mind the need for a certain intuitive performance, glimpses of which are there in abundance in Mayurakshi. “I have worked with those actors who could bring out those instinctive behaviours on screen," the director said. "Like Mayurakshi, both Binisutoy and Robibar are going to present two pairs that the audience has not seen before."