Mission Mangal was too important a film to let go of, says Kirti Kulhari


Actress Kirti Kulhari explains why she agreed to the multi-starrer, what kinds of roles she would like to play now, and the power film characters hold.

As Mission Mangal (2019) continues to soar, heading closer to the Rs200 crore mark at the Indian box office, the multi-starrer has put to rest the doubts many had before the film was released. Would so many stars be able to work cohesively in the space drama? The answer is yes, of course.

At a media interaction last month, before the film's release, actress Kirti Kulhari said she didn’t have second thoughts about signing on to the film because of the calibre of talent attached with it.

“I think it’s too important a film to let go of and not everything has to revolve around me,” she said. “Sometimes you find films that, as an actor, you find very challenging and you really want to do it for that particular reason, and sometimes there are films where you just know that being a part of that film will not only add value to the film, but the film will add value to you.”

Furthermore, the film brought to the public the story of the Mars orbiter mission, a tale the common cinegoer didn’t know much about. Earlier this year, Kulhari was part of a similar film, Uri: The Surgical Strike (2019), that lifted the veil on the events after the 2016 terrorist strike in Uri in Jammu & Kashmir. The film recently won a clutch of National awards as well.

In Mission Mangal, Kulhari plays a scientist from Lucknow, Neha Siddiqui, who deals with weighty issues in her personal life. She is going through a separation from her husband and finds it hard to rent a place to live, being single and a Muslim. 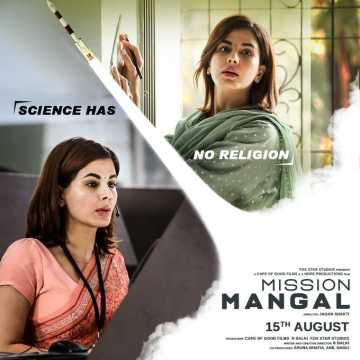 But in the film, her problems take a back seat to the larger mission at hand. “When you get a purpose or you get a mission in life which is much bigger than your individual problems, people just forget about their problems. All together you just work towards that, and then what is possible is also what Mission Mangal is about,” she said.

Though she is playing a scientist, her preparation for the part was quite fun and easy, according to Kulhari, who admitted that she is technologically handicapped. “I sat with Jagan [Shakti], my director, discussed [my character]. I read about the original mission," she said. "My department in the film is satellite autonomy, I tried to understand it a bit. Beyond a point, it gets too technical and I can’t handle it. I saw some documentaries on space, I saw the Apollo 13 documentary and film. I’ve seen Hidden Figures (2016) already and the rest, Jagan was so technically sound about everything.”

But the draw of the film, Kulhari felt, was the way the mission was approached to reach a wider audience.

“While it’s a serious mission and everyone’s doing something very big, the treatment of the film is very light. It’s very slice-of-life, you’ll actually have fun watching this film, and the technical thing is, they have tried to keep it as minimal as possible.”

The actress revealed that she feels she has honed her craft in the time since she made her debut with Khichdi: The Movie (2010). “I’m hopefully becoming a better and better actor," Kulhari said. "There is nothing special that I’m doing, just my job.”

When she selects her roles, she looks out for characters that allow her scope to do something, she said. “The kind of characters I want to play now are just becoming more and more complex, mujhe simple characters mein mazaa aana kum ho raha hai. Now you will see me exploring different kinds of characters, like probably grey characters or black characters. You will start seeing me going into zones which are not comfortable.”

Asked if she gets attracted to stories which have a national connection like Pink (2016) and Uri, Kulhari replied in the affirmative. “Because I’ve been a part of them and I’ve experienced what they do to the people around," she explained. "If I do two scenes and go, but if that film is important for everyone to see, I would surely take my chances with that film.”

The reason, she felt, was that actors can bring about change through the stories and characters they put forward and this spurs her to do more.

“We can change perspectives, we can change minds, we can start conversations and I understand that responsibility,” she stressed. “I understand that power. While I’ll always have fun doing what I’m doing, I would not want to waste that opportunity. I would love in my own way, as an actor, to just reach out.”

But that’s not to say she is not open to other genres of film. She reiterated that she was more open now to do anything than she ever had been. But as a lot of hard work goes into becoming a character, the role and the film have to be fulfilling.

Meanwhile, the actress is now filming her next, a remake of The Girl On The Train (2016), in London, in which she plays a cop. She will next be seen in the web-series Bard Of Blood, starring Emraan Hashmi, on Netflix on 27 September.