The writer-director speaks about the nature of Shakespeare's Shylock, the tragic hero of her film Noblemen, which is streaming now on Netflix.

In Noblemen, Vandana Kataria took a Shakespearean classic and transformed it into a gritty, hard-hitting tale of a boy battling his demons in boarding school. Praised for its take on bullying, Noblemen was an impressive debut for the director.

Back in June, Kataria had spoken with Cinestaan.com about the film. Describing the writing process as "difficult", Kataria admitted that she always doubted herself. "Direction was always on the cards, but I have not explored writing the long format," she said. "I was also very afraid about whether I could do it. I kept giving an excuse to myself that 'I don't know how to'."

Having worked as assistant to director Dibakar Banerjee on Oye Lucky! Lucky Oye! (2008) and production designer on Shanghai (2012) and Detective Byomkesh Bakshy! ( 2015), Kataria finally decided to take the plunge. 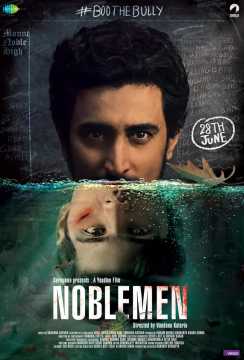 The result was Noblemen, a film that transforms Shakespeare's tale of revenge into the setting of a boarding school in northern India. Speaking of the bard, Kataria said, "My hero is also a tragic hero, and he loses everything."

Noblemen features Kunal Kapoor, Ali Haji and Soni Razdan in key roles. With the film being streamed on Netflix from today (5 October), here are excerpts from the conversation:

Why did you choose The Merchant of Venice to set the backdrop for a story about bullying?

I picked The Merchant of Venice because it is quite a controversial play, because of its anti-Jewish element, and because of the homosexual undertones. Even back then, people wondered if Antonio was in love with Bassanio.

For me, revenge is not a word in my dictionary. Violence begets violence. I don't believe in vigilante justice. But I liked the themes of these.

In hindsight, Shylock himself is a product of bullying by society. The trailer for Noblemen also hints at a dark ending, quite like Shylock's tale. Was that evident when you were writing?

When you think of it, it was conscious. And in a way, not so much. Again, in theme, it [Noblemen] is very true to The Merchant of Venice, but not in plot point.

My hero is also a tragic hero, and he loses everything.

How did you start writing the story? What led to it?

I was actually selling my first script, which is now my second film. I was attached with two or three pictures. They told me about the Saregama projects, based on published works. I was among the first persons that Saregama met. I wanted to check and meet them. We had a few differences but I realized I had a win-win situation here.

Somebody was giving me a film to make. Someone was giving me a non-mainstream idea, and the fact that they were okay with an adaptation that was so hard on its content was a win-win situation.

I went to them with another adaptation of The Merchant of Venice, something totally different. I also had an adaptation of George Bernard Shaw's Pygmalion. The earlier Merchant of Venice adaptation was set in a world of petty thieves, thugs, bar dancers and eunuchs. But I realized I would take a year to research this, since I knew nothing about this life. But I had grown up in a boarding school and knew all about it. The idea came from Sid Kumar, the producer from Yoodlee.

The minute they suggested it, it struck me. It fits into the constraint of the project. The project had its parameters, and I felt that I knew the world halfway. We did research it, and spoke to a lot of boys and teachers from boarding schools.

The horizon of bullying has expanded far beyond just boarding schools, into social media, public spaces. Do you think the film will work as a parable to these?

I think the way we have dealt with certain things... audiences watch so many films today that we are film savvy, we know at the beginning what is going to happen at the end. You have seen enough movies to know.

I am hoping people will recognize that this is a microcosm to the larger issue. We are aware. What was the MeToo movement? It was about bullies who were perpetrators. We have all seen it, suffered it, so I think people will get it.

You mentioned in an earlier interview that you wanted to be a writer-director. But you have also worked as a production designer. Did this shift help you on the way to being a better director?

I consciously chose this journey. On Oye Lucky! Lucky Oye! (2008) I was the first assistant director and production designer. On Shanghai (2012), Dibakar asked me what I wanted to do, assisting or production design. I chose production design because an AD's job is administrative. Then, Byomkesh (Detective Byomkesh Bakshy!) happened.

In between these, I directed ads, music videos, corporate films, written scripts. Direction was always on the cards, but I had not explored writing the long format. I was also very afraid about whether I could do it. I kept giving an excuse to myself that "I don't know how to".

But after Byomkesh, I took the time out. I took a year to refuse every bit of work. I took courses online and taught myself how to write. That's how I wrote my next film, which will be with RSVP.