Despite 10 editions under its belt, Jagran festival continues to be chaotic and harrowing for fans


The travelling festival's tenth edition began in Delhi on 18 July and ended in Mumbai on 29 September.

The tenth edition of the travelling Jagran Film Festival ended this week in Mumbai, but though the festival has been in existence for a decade, the organizers seem to be still struggling to grasp the finer points of putting together an orderly, functional event.

The Mumbai edition began on Thursday 26 September at the Cinepolis theatre in Andheri, its usual venue. All the films and events were scheduled at the same location, yet chaos reigned over the four days of the event. Long lines at a festival are to be expected, but when things almost descend into a stampede, it’s just not acceptable.

But that was exactly what the scene was at many of the conversations that took place on Friday 27 September with personalities like Kartik Aaryan, Karan Johar and Vicky Kaushal. In some instances, separate queues for men and women just added to the confusion.

Festival-goer Manish Raj Singh said, “It is always good to get all information from one desk. But here it is spread out. We don’t know which desk is situated where. And it’s very congested. Jagran in Mumbai was good in 2017. So it should have been better in 2019, but it has gone down instead.

Members from the event management team often had conflicting answers to when a screening or event would start, or whether a queue was for those with reserved seats or walk-ins. For the Kartik Aaryan conversation, it didn’t matter, as everyone just swarmed in when the previous conversation with casting director Nandini Shrikent ended at the same time. Speaking of which Shrikent's last name was misspelt in the brochures as well as the online schedules.

Most of the screenings we attended began late. There were technical difficulties at the Jhalki screening on 26 September and director Brahmanand S Siingh said the version shown was not the one he wanted. An additional screening was later organized.

The premiere of the Hindi movie Nirmal Anand Ki Puppy was spoilt because the air-conditioning was not working for most of the film's first half. Though the film was interesting, the audience had to literally sweat to see it at least till the interval.

Rohena Gera's Sir was interrupted at the beginning by some technical issues with projection. Thankfully, it did not mar the viewing.

The key problem at the festival was crowd management. While it was fairly easygoing during daytime, the talks and conversations with leading members of the industry attracted the maximum crowd. And considering that the festival runs for just four days, it just meant too many people jostling to get in for the talks. 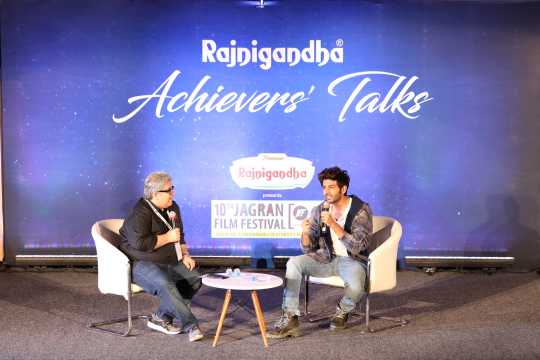 Among the most populated talks were those involving Kartik Aaryan, Karan Johar and Vicky Kaushal. At the Vicky Kaushal event, in fact, the crowd management just got out of hand. With the event planned for 8pm, crowds began to gather at the venue (auditorium 4 at Cinepolis) by 6pm. But there was another event going on at the venue, which meant there was an audience inside that was yet to make its exit.

But the crowd outside was growing, and also getting restless. To try and calibrate the crowd, the team decided to split the queues into men and women rather than those with confirmations and those who were simply walking in, as it was doing for other events.

This led to further confusion, which resulted in the crowd getting bunched up near the entrance. Fearing trouble, the team decided to let in the women in first. Considering the smaller number, this should not have been a problem.

But with the programme timing closing in, it became quite difficult for the gatekeepers to manage the crowd that was beginning to shout and push against a narrow corridor. For the Karan Johar event, even those with registrations were made to wait almost an hour in the corridor where there is no air-conditioning. 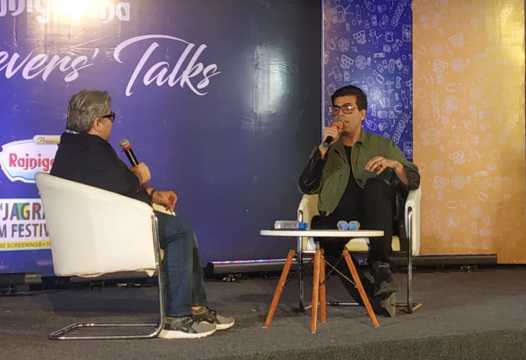 While many had to remain standing in the auditorium and others decided to just leave, the event did carry on to the end.

Another festival-goer Rajdeep said, “The problem here is management. There is a different queue for those with reservations, but we are still made to wait for long in the heat. There should be a separate queue or no queue for senior citizens. I saw three or four senior citizens suffering after being made to wait in queue despite being registered.”

Rajdeep said the Jagran festival in Delhi this year was better managed, "maybe because it was in a bigger place like the India Habitat Centre”.

Then there were the glitches in the computer system causing delayed entry at some of the auditoria on the final day, as happened at the screening of Forbidden Tikka Masala on 29 September.

The crew member of a film that was screened at the festival, who asked not to be named, said, “There was nothing here on day one. You should at least have a separate media counter. There was no bifurcation. Everybody was in the same queue. It was chaos. The registered, unregistered and media people were all in one queue.

“Once I found out who had been assigned the task of giving out passes, I wrote the word ‘media’ on a piece of paper and stuck it on his laptop. At least do this much to let people know where the media counter is! That man [part of the organizing team] himself told me that this is how it goes with them!

“At other festivals, the registered queues are faster. Plus here you are blocking the entire entrance with the queue. And there is no AC. There are some events where there is a huge crowd. So people who are there for another event also needlessly wait in that crowd as there is nobody to guide them. The venue is also small. Maybe Jagran has outgrown it.”