50 years of Aradhana: Ashim Samanta on the incredible story behind the making


Filmmaker Shakti Samanta's son Ashim, a schoolboy in 1969, recalls the making of the film and its premiere.

Shakti Samanta’s iconic film Aradhana (1969) is etched in movie history for several reasons. For one, it catapulted Rajesh Khanna’s fledgling career to astronomical heights, making him a star overnight.

The film also enabled Kishore Kumar to exhibit his vocal skills, decisively unseating the monarch of playback singing at the time, Mohammed Rafi.

The film also took the bold risk of presenting its leading lady, the uber-glamorous Sharmila Tagore, as an old woman.

All of these unconventional moves worked, congealing to make a film that remains a classic 50 years after its release.

There were several accidents that led to the making of Aradhana, a film inspired by Hollywood's To Each His Own (1946). In an exclusive interview with Cinestaan.com, producer-director Ashim Samanta, son of Shakti Samanta, recounted the story behind the making of the iconic film, while also clearing the confusion about the film’s release date.

Shakti Samanta was all set to begin work on Jaane Anjane (1971) with Shammi Kapoor, but the shooting got delayed and the filmmaker thought of making a small-budget film in the interim. Writer Sachin Bhowmick had narrated the story of Aradhana to the filmmaker. It was a woman-orientated subject, with the story being told from the heroine's perspective. The script was originally titled Subah Pyar Ki. This was the film Shakti Samanta decided to make.

Ashim Samanta recalled, "The Filmfare-United Producers Combine Talent Hunt had selected Rajesh Khanna as its winner, so he thought of casting the young boy, and Sharmila was our permanent heroine. There were three films she had already done [with us] and this was the fourth. She was hesitant about playing a mother, but Dad convinced her. With him, she couldn’t say no to anything. So, grudgingly she accepted the role. Rajesh Khanna heard the story and thought it was a heroine-based story but said that he had no choice so decided to do it. So both lead artistes did the film grudgingly."

There were other hurdles to come. A few days before the mahurat, Surinder Kapoor, a producer and father of Boney and Anil Kapoor, asked the filmmaker to see the last two reels of his film Ek Shriman Ek Shrimati (1969), which was also written by Bhowmick. While watching the film, Samanta realized the climax of Kapoor’s film and that of Aradhana were exactly the same.

Upset, he had almost decided to scrap his project when writer Gulshan Nanda suggested they change the last two reels instead. Ashim Samanta said, “Dad narrated the story to him [Nanda] and he said, ‘Shaktiji, the story is fantastic. Let’s work on the climax.’ And they started working on the climax from 4pm to about 10pm and changed the entire second half! So, a movie which the hero and heroine signed hesitatingly, and which was almost scrapped until they changed the second half, and was made as a small-budget quickie, became one of the biggest hits!”

Looking back at the popular perception around the film, Ashim Samanta said, "I remember I was in school and my friends asked me what film Dad was making. I told them Aradhana with Rajesh Khanna and Sharmila Tagore and they said, ‘Has your father become bankrupt [as he is not taking a big male star]’? And I said, ‘No, no, he is making Jaane Anjane with Shammi Kapoor after that’, and they said, ‘Oh, then it’s fine’. But the irony is that Jaane Anjane didn’t do well at the box office while Aradhana became a superhit."

Ashim Samanta also recalled the buzz at the premiere of the film and the completely unexpected way in which the audience responded to Khanna. He said, “The film was first released in Delhi on 31 October and on 7 November, it was released in Bombay and other places. I remember attending the premiere. I was studying in the 10th standard at the time. When the film started, nobody even looked at Rajesh Khanna. He was not a star. But at the interval, there were about 500 people surrounding him. By the interval, he had become a star!” 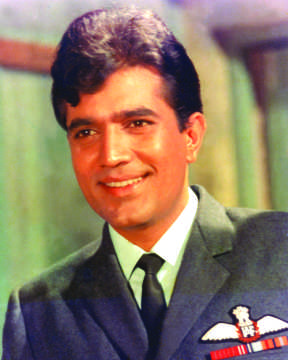 With the incredible talent working on the film and the unusual storyline, Ashim Samanta recalls that while they were confident of success, they had not quite envisaged the impact it would have in the decades to come. He said, “I saw the movie much before its release. I had taken 15–20 friends from school. Everybody went crazy about the movie, so we were convinced that it will do well. Of course, we didn’t know it would do so well because everybody just loved the film.”