The placement of two bottles at the front of the poster makes it rather commercial and catches the attention more than lead actor Ritwick Chakraborty.

The official poster of Abhimanyu Mukherjee’s upcoming film Teko, featuring Ritwick Chakraborty and Srabanti Chatterjee, is out. The poster features Chakraborty sitting in a chair, looking confused, while hands approach him with various products for hair care, a wig and a pair of scissors.

Earlier, Surinder Films, the producers, had released a teaser poster that did not feature any of the protagonists but with an interesting suggestive image and tagline.

Teko is the story of government employee Alokesh, who is quite conscious about his hair. Mina (Chatterjee) too has a fascination for sporty hairstyles. Their marriage is arranged through a matchmaking site and they find common ground in their fascination for hair.

However, the situation turns upside down when, tempted by an advertisement for hair oil, Alokesh buys it and begins to lose hair instead. This not only leaves him disappointed, but Mina, too, decides to call off the marriage. The film then traces the journey of the two getting united.

The poster expresses the anxiety of Alokesh and it is evident that in the film, as he starts losing hair, he begins to try every possible means to get it back. However, the image of two bottles right upfront in the poster turns it rather commercial. The placement of the products catches more attention than Chakraborty himself. 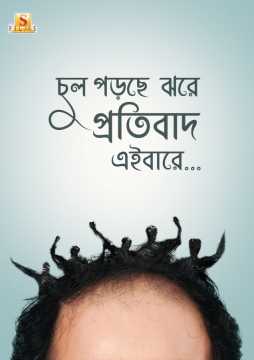 Instead, the teaser poster is much more sugggestive of the film's intended message. Though no artiste is featured, it is quite apparent that the image of a forehead with a receding hairline is Chakraborty's. The tagline stating 'Chul Porchhe Jhore Protibad Ei Bare' hints to a protest against hair fall. To elaborate the statement, there is an image of hair from Chakraborty’s forehead turning into the graphical image of protesting figures.

The image of figures protesting against hair fall suggests an exaggerated and dramatic approach towards the subject. In an earlier interview, director Mukherjee had stated that he would like to call this film a social satire regarding the massive impact of commercials on the lifestyle of common people.

The poster of the film has been released at a time when two upcoming Hindi films, Bala and Ujda Chaman, are making news for their similar theme of balding men and the issues they face. Both films are comical in their approach. However, Teko seems to have taken a different route. As per Mukherjee’s statement, in this film, hairfall is a metaphor through which a bigger message is to be conveyed.

Teko is slated for release on 22 November. Bala and Ujda Chaman are both scheduled to be released on 8 November.