The poster features Keerthy as a pregnant woman and it can be sensed from her profile that she’s sad.

Actress Keerthy Suresh’s upcoming Tamil project with filmmaker Karthik Subbaraj has been titled Penguin (2020), its makers revealed on Thursday on the occasion of Keerthy’s birthday.

The poster features Keerthy as a pregnant woman and it can be sensed from her profile that she’s sad. Tipped to be a horror-thriller, the film will see Keerthy take revenge but not via human form.

Apparently, Keerthy gave her nod to the project after hearing two lines of the story as she was quite moved by the core plot. Believed to be a female-centric project, the film will see the recent National award-winner in a dark but emotional role. She’s currently on the verge of wrapping up shoot for this project which is being predominantly shot in Nilgiris, Tamil Nadu.

Keerthy has an interesting line up of projects. Post Mahanati (2018), she’s become quite choosy of the projects she chooses to headline. 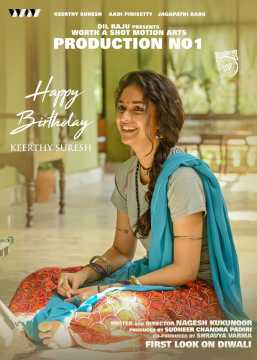 In Telugu, she has Miss India and a yet-untitled sports romedy with Nagesh Kukunoor. In Miss India, she’s rumoured to be playing a model and she shed over 15 kilos for her character. The transformation was quite evident in the teaser which featured her in an extremely thin avatar.

Keerthy also has her Hindi film debut with Ajay Devgn in Maidaan (2020). It’s a film that will trace the life and time of Indian football player and coach, Syed Abdul Rahim.

If the industry grapevine is anything to go by, Keerthy is also said to have been roped in for Mani Ratnam’s Ponniyin Selvan, which will also stars Vikram, Jayam Ravi, Karthi, Aishwarya Rai Bachchan and Anushka Shetty among others.

Buoyed by the success of Chekka Chivantha Vaanam (2018), Lyca Productions has agreed to come on board to fund Ratnam’s dream project. If everything goes as planned, the project might kick off from this year-end or early next year. Telugu veteran actor Mohan Babu is said to have been roped in for a crucial role in the film, which will be simultaneously made in Tamil and Telugu.