The animated version of Johar's directorial debut Kuch Kuch Hota Hai was directed by Tarun Mansukhani, whose Drive is also not getting a theatrical release.

Recently, filmmaker Karan Johar decided not to release his production Drive in the theatres. The film, starring Sushant Singh Rajput and Jacqueline Fernandez, will be released directly on Netflix. The film has been ready for more than a year.

There is another film which has been hanging fire for close to a decade now, a film through which Johar had ventured into animation. The film is Koochie Koochie Hota Hai, an animated version of his own directorial debut Kuch Kuch Hota Hai (1998).

Going by what Johar said at the recent Jagran Film Festival in Mumbai, it appears that Koochie Koochie Hota Hai will never get an audience. “We actually tried to animate Kuch Kuch Hota Hai and made something called Koochie Koochie Hota Hai and that was... (pauses) we didn’t get it released. There were a series of films in the same zone that hadn’t worked,” Johar said while answering a question on animation films.

Interestingly, both Drive and Koochie Koochie Hota Hai were directed by Tarun Mansukhani and both will not get a theatrical release, though the former will at least be seen online. Mansukhani was an assistant director on Kuch Kuch Hota Hai. 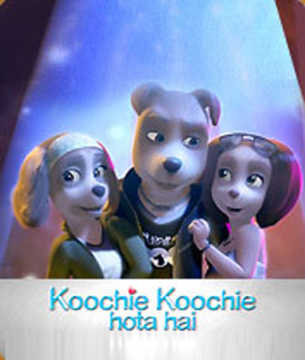 The animation for Koochie Koochie Hota Hai was done by Prana Studios. It was during post-production that Johar felt there was no use putting money into it. “We felt that the post-[production] of the film was very expensive," he said. "We would have been putting more funds into that film and not translating it into anything. So we held back. I am not sure. That’s not a zone I comprehend or understand. That’s why what I did I should not have done.”

Koochie Koochie Hota Hai had voice-overs by members of the cast of Kuch Kuch Hota Hai like Shah Rukh Khan, Kajol, Rani Mukerji and Anupam Kher. There were additional voice-overs by actors Sanjay Dutt, Riteish Deshmukh, Uday Chopra and Sajid Khan. Dutt voiced the character of Aman which was played by Salman Khan in the original.

The filmmaker ended his answer by saying, “I am not somebody who is a force to answer that question. I don’t think I am equipped at all because I failed and fumbled in that zone myself.”