In recent years, Dev Adhikari as a producer has attempted to present certain contemporary crises in his films, with entertaining elements. While dealing with socially relevant issues in films like Cockpit (2017), Kabir (2018) and Kidnap (2019), Adhikari also made sure to experiment with filmmaking. His upcoming venture Password (2019), directed by Kamaleswar Mukherjee, deals with the issue of cyber crime, a subject on which no Bengali film has been made so far.

Password stars Adhikari, Parambrata Chatterjee, Paoli Dam, Rukmini Maitra and Adrit Roy and is slated for release on 2 October, along with three other films Gumnaami, Satyanweshi Byomkesh and Mitin Mashi.

According to Adhikari, Password highlights various aspects of cybercrime, including blackmail, fake currency and data theft, "Though our lives are inextricably linked with the internet and the digital world, many of us are hardly aware of various technicalities that are directly linked to cyber crime. However, in the near future, these issues are going to have much more prominence in our lives," the actor-producer said. For this reason, Adhikari believes Password is a film ahead of its time, as it aims to raise awareness regarding these seemingly far-fetched issues. 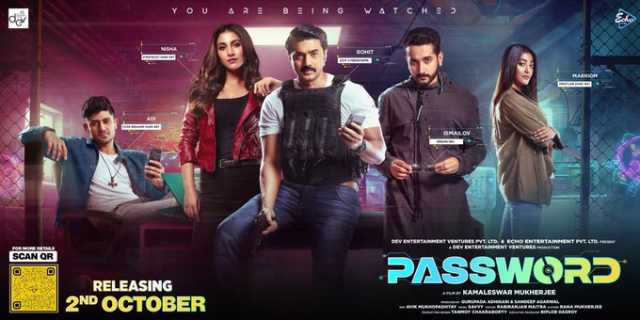 While addressing these complex issues, Adhikari has kept the elements of entertainment in mind as well. "Issues of cyber crime related to foreign investment and how the police get wind of such crimes have been explored in this film," he said. "However, this is an entertaining film. I firmly believe cinema is a platform for entertainment. If we start getting into lecturing, the audience might get bored. The drama, romance and action-filled story has been woven with cyber crime-related issues and the audience needs to find out how the story is summed up."

Unlike the film Snowden (2016), which explored the arena of crimes staying within cyber systems, Password attempts to show how cyber crime can involve relatively minor issues such as fraud and blackmail to major crises like a threat to the country's defence sector. As its tagline says, ‘You are being watched.'

Mukherjee’s film promises to highlight the fact that each and every activity of our daily life is now under somebody's watch. Also, the film hints that if another world war were to take place, it would be executed through the use of data and information technology.

Adhikari stated, "With Kamal-da, I have always attempted to choose subjects that are out-of-the-box, whether it was Amazon Obhijaan (2017) or Cockpit (2017). Before Cockpit, no film on a crash landing was made in India. For the first time, we shot an entire film 36,000 fit above sea level."

While contemplating another such storyline, the duo thought that films on cyber crimes are being made around the world but not in Bengali. "Initially, I was quite nervous about taking up such an unusual project," Adhikari said. "Then we got into thorough research and got lots of stories in hand. We decided that the film had to be made on a grand scale. We required the film to have an international touch because cyber crime is now a global problem." Adhikari was ready to produce the film when Mukherjee approached him with the script.

Speaking of the risks of producing such a film, Adhikari said, "There are many issues in the film which the audience may not be familiar with. However, if we always think of the audience’s understanding first, then we won’t be able to present unexplored content. I am sure they would rather be enlightened on a lot of these issues while watching the film and will also start becoming cautious in their daily life."

The actor-producer, who is also a member of Parliament, said he feels sad that Bengali cinema, which used to be a source of inspiration for other film industries in the country in the 1960s and 1970s, now lags in terms of content and cinematic expertise. “To be at the same level as other flourishing industries, we will have to take up burning issues of the present and reflect them in our cinema," he said.

Adhikari said the process of making this film was not smooth. Starting from deciding on the subject, he faced a lot of issues, including on finalizing the cast. "It was difficult to get Parambrata and Paoli’s dates," he said. "Besides, you can sense from the trailer that getting the CGI [computer-generated imagery] done was a tedious process. Also, we got Avik Mukhopadhyay, one of the best cinematographers in the country, Tanmoy Chakraborty, the most sought-after production designer, and editor Rabi Ranjan Maitra on board to lend an international look to the film."

On a different note, Password, Gumnaami, Satyanweshi Byomkesh and Mitin Mashi were struggling to get shows on 2 October because of the release the same day of the Hindi film War (2019) and the Hollywood film Joker (2019). Adhikari took the initiative and drew the attention of the government by posting a tweet to support Bengali cinema.

Following this, the four films were able to procure 72% of shows in the coming week. Adhikari said that while there is a stiff competition among the four Puja releases in Bengali, that does not mean he would like the other films to fail. "Had that been the case, I would not have approached the government to ensure shows for all the films," he said. "But, honestly, of the four films I feel Password deals with the most challenging issue. I don’t know how good or bad it is, but we have tried to pitch a new subject."