It is a nice space to be in, says Ayushmann Khurrana on playing Bala

It is easy to see why Ayushmann Khurrana is going through a purple patch at the moment. The actor carries himself with an easy confidence as he walks into the room for an interaction with journalists in the run-up to the release of Amar Kaushik's Bala. Unlike his character, Khurrana sports styled hair and the air of a man who can do no wrong.

"The idea is to just have my own space," Khurrana tells the journalists. "The film, Bala, is about self-discovery. It took me a while to discover myself too. Immediately after Vicky Donor (2012), there were a few unsuccessful films. Then I thought this is my zone. Let me just consolidate that and play to my strengths. Then, once in a while, let me just change it."

The space Khurrana is referring to has been redefined over the past two years. In these two years alone, the actor has explored films like Andhadhun (2018), Badhaai Ho (2018), Article 15 (2019) and Dream Girl (2019), all of which have been critically feted and commercially successful.

With Bala, he enters new territory as a bald leading man. "I have ventured into far-fetched territory like sperm donation and erectile dysfunction, this is the most common one," the actor explained. "Most of my friends are suffering from it in their thirties and even twenties. Moreover, it was the empathy [in the script] which I thought drew me to it."

At the media interaction, the actor spoke about his choice of films, the message in Bala, the controversy surrounding the film and his acceptance of stardom. Excerpts:

It has been a rollercoaster journey over the past couple of years. With Bala, it is new territory....

I have ventured into far-fetched territories like sperm donation and erectile dysfunction, this [premature balding] is the most common one. Most of my friends are suffering with it in their thirties and twenties. Moreover, it was empathy which I thought drew me to it. I have met people who are bothered by it, and those who don't care about it. The idea is to have that side be more prominent. That is the message. What is the fun of making a film without a message or value creation?

Bala arrives at the same time as Ujda Chaman (which was released last week, six days ahead of Bala). Any thoughts on their approach to the subject?

Bala is celebrating self-love. It is not about receding hair or baldness, it is about discovering yourself and loving yourself. We shot our film first, and announced it first. It is simply about one line of the film which is the same. I have seen the southern film [Ondu Motteya Kathe (2017, Kannada)] and our film is completely different.

Does that bother you, both films coming out at almost the same time?

It happened with [the] Bhagat Singh [films] also [in 2002]. The film which is good will do well. This [Bala] is a beautiful film, and one of the best scripts I have ever read. Anybody can come up with the same idea. It is about treatment.

Did the experience of playing a bald man teach you something new?

Not really. I knew everything [about the subject]. I have had friends who have receding hairlines and even Hakim Alim, who styles my hair, is bald. By default, I knew every possible thing that people do.

It is also about any complex you might have. The film is about acceptance, which is a beautiful message in the end.

Your next film, Shubh Mangal Zyada Saavdhan, is again about a complex subject. Given all these pressures of moving from script to script and the pressure of the box office, does it become difficult?

Well, it comes with success. The success of the films plays on your stardom, of course. You get less time with your family. People start seeing you in a different light. At the same time, it is difficult to choose topics that are rare every single time. But I am glad we are born in a country where there are so many taboo subjects.

Our country is full of conservative people and full of progressive people. When they meet, that is when comedy emanates. There is a very bizarre situation in our country where 70% of our nation is primarily rural. When these people migrate to the cities, they get a cultural shock. Cinema gets fodder from these situations.

In Bala, for example, there is a definition of beauty followed across the nation. A guy has to be tall, has to have a good head of hair, a girl has to be fair. We need to challenge these definitions of beauty.

Always, the aspiration will be to choose topics that are novel.

Another point of contention for the film was writer Kamal Kant Chandra claiming that he first gave you the idea for the film.

Right, to answer that, I have been given the same idea by six different people. The same idea of hairfall. There was another film Hair Is Falling in 2011. It was my decision to go with the best director and best producer on the subject.

Do you feel yourself under pressure to choose your next script, and whether it will match your previous success?

That's always there. We always have to touch the benchmark legacy each time. It is a pressure for sure, but it is a happy pressure. It gives you confidence each time, and encourages you to be more of a risk-taker.

At the same time, I want to take it easy now. My line-up for the next year is ready. Gulaabo Sitaabo and Shubh Mangal Zyaada Saavdhan will happen next year. Now, I am just reading scripts. 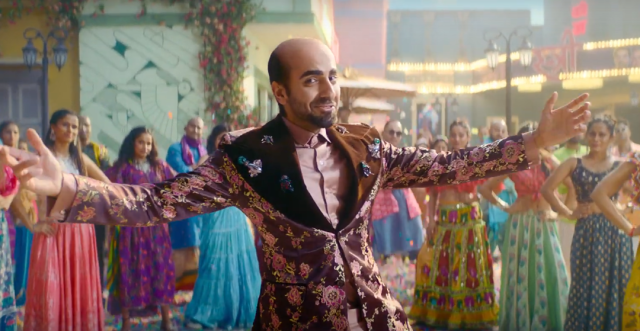 You have become synonymous with playing the common man. Would you like to be part of an out-and-out superhero or larger-than-life film?

The idea is to just have my own space. The film, Bala, is about self-discovery. It took me a while to discover myself also. Immediately after Vicky Donor (2012), there were a few unsuccessful films. Then, I thought this is my zone. Let me just consolidate that and play to my strengths. Then, once in a while, let me just change it.

My zone is slice-of-life, quirky, taboo films, but once in a while I will venture out and do a film like Andhadhun or Article 15. It is a good space to have.

What was the experience of seeing yourself in the mirror with the prosthetics?

It was a different person altogether! I didn't recognize myself. I thought I looked like my grandfather. But I could relate to why the complex exists. My father is quite gifted. He turns 70 next year and still has a full head of hair. My grandfather, I remember, had sparse hair. So then I started empathizing with a lot of people. My friends, for example.

The toughest part was the prosthetics. I did want to go completely bald and shave my head. But there were different stages of baldness that we needed to show. So we opted for the prosthetics. I would take two and a half hours to get ready. For a 7 o'clock early morning shot, I would wake up at 4 o'clock. 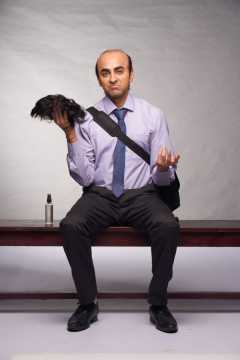 Did you have any 'outsider' complex when you entered the film industry with Vicky Donor in 2012?

To be honest, I was like a lost cow those days. I didn't have anybody to guide me. There was nobody to tell me this is the diktat, and you should follow this. I discovered everything on my own. There was no outsider complex that way. It is only because of that. I was breaking all the rules, because I did not know any rules.

What does stardom seem like, now that you are the peak of your game?

Stardom, by default, makes you an opinion leader. Everybody puts you on a pedestal and expects you to give an opinion on everything.

At the same time, stardom is also treading a thin line between contentment and ambition. For your own sanity, you cannot be completely contented, otherwise you won't be excited to work. You can't be overly ambitious. In that case, you will be going cuckoo in your head, or become a hustler.

How do you navigate that?

With discipline, of course. You approach a particular film with ambition. If it does well, you have to be contented. You cannot always feel like you have to do better than this. It should be there in the back of your mind, of course, but you have to go with the craft. Not commerce all the time. That's not your headache. It is your producer's headache. That's all there is to it.