The former co-stars were last together at the 45th edition of the Indian Film Festival of India.

The 50th edition of the Indian Film Festival of India (IFFI) will reunite two superstars of Indian cinema as Amitabh Bachchan and Rajinikanth will attend the grand opening ceremony. The former co-stars were last together at the 45th edition of the film festival back in 2014.

The Stalwarts of Indian Cinema Shri @SrBachchan & Shri @rajinikanth will grace the #IFFI2019 Opening Ceremony after their appearance together at 45th IFFI in 2014. @satija_amit @esg_goa @MIB_India @PIB_India#IFFI50 #Rajinikanth #AmitabhBachchan pic.twitter.com/sNWla5a0IP

There will be special screenings of Bachchan's films at the film festival as the actor is this year's Dadasaheb Phalke awardee. The veteran actor was announced as the 50th recipient of the highest honour of Indian cinema this September by the union minister for information and broadcasting, Prakash Javadekar.

Over the weekend, it was announced that Rajinikanth will be conferred with a special Icon of Golden Jubilee award at the festival. The decision to go all out and bring in the star power of the veteran actors seems to be a good move for the golden jubilee of the film festival. 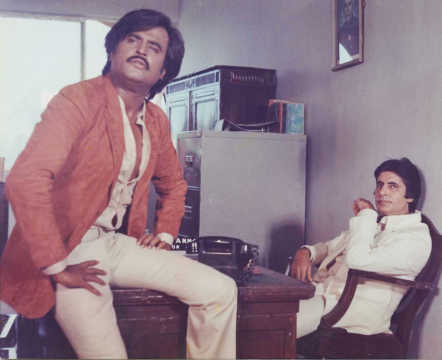 The two actors first worked together on Andhaa Kaanoon (1983) and their last film together was Hum (1991) directed by Mukul Anand.

The festival will be held from 20 to 28 November in Panaji, Goa.