The actor spoke about Bharat Bangladesh Film Award initiative and described its objectives at an event last month.

The Film Federation of India took a commendable step for uniting the cultural front of India and Bangladesh by introducing Bharat Bangladesh Film Award (BBFA) that recognises and honours artistes from the two neighbouring countries on a single platform.

Prior to the awards cerenmony, at another event on 18 October in Kolkata, where the BBFA trophy was unveiled, Hossain, who has been working in the Bangladeshi industry for more than three decades, addressed the multiple issues behind the initiative and described its objectives.

He stated that the award ceremony was initially conceived as Bharat Bangla Award and later it was changed into Bharat Bangladesh Film Award to put emphasize on the concept of collaboration. He expressed his grief for the present, sad scenario of Bangladeshi and Bengali cinema, comparing it to the current state of Hindi film industry, achieving international recognitions around the world.

“Forget about us, the artistes from previous generation. Now there are actors like Prosenjit, Jeet, Rituparna and Shakib (Khan), who are working in films made in both the countries. They are no less than any of the artistes working in Mumbai. Then why are we left far behind, in terms of getting recognitions?" he asked. 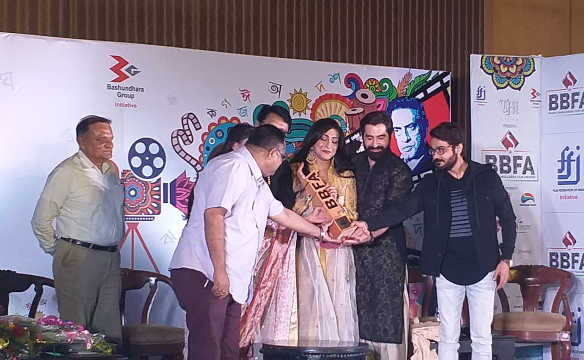 "I think we lack the mentality of pushing ourselves forward because I feel, once Bengalis take the initiative, no one can stop them," the veteran actor stated.

Hossain stated that this is only the beginning of the collaborative initiative between the Bengali and Bangladeshi film industries. The award ceremony will be held in London in the next year.

“I only wish to see further progress in this direction and see more films made in collaboration. I think, if artistes of both the regions come together and make films then it will serve best interests of both the industries. During the 1990s, [the] artistes from Bangladesh came to Kolkata and became part of Bengali films, which made contribution to Bengali cinema itself," Hossain recalled and mentioned that not every artiste from Dhaka welcomed participation from India.

"We want to make good films more and thus, restore the entire industry," the National award-winning actor said. He also observed that in recent times, many single screen theatres in Kolkata have shut down. “Kolkata halls still have the opportunity to run films from other languages. Our father of nation Sheikh Mujibur Rahman had barred us from screening Hindi or Urdu films and we are still continuing with the tradition. We don’t have the power to manipulate it," he shared.

On a personal note, he said, "I always took shortcut as an actor and later, when I started taking my job seriously, my time was gone."

Nowadays, the actor directs and produces films. He is working with Rituparna Sengupta on one of his films. Another film feature filmmaker Goutam Ghose is based on the life of of Banga Bandhu, Sheikh Mujibur Rahman.