Ali and filmmaker Rahul Rawail held a masterclass on the contemporary filmmakers of different generations at the ongoing 50th edition of International Film Festival of India (IFFI).

Filmmakers Rahul Rawail and Imtiaz Ali held a conversational masterclass of the contemporary filmmakers of different generations at the golden jubilee edition of the International Film Festival of India. The session began with clips of Rawail's Arjun (1985) and Dacait (1987), after which Ali's short film India Tomorrow was screened.

Rawail spoke of how the times affected his filmmaking, "You learn while watching films and understand what other people have done. There were incidences in Arjun where Sunny Deol cried but he didn’t cry the way he should at that point of time, but what Imtiaz has done in his films, that is commendable."

"My elder son Bharat heads the creatives at YRF [Yash Raj Films] and the younger one Shiv is soon going to be launched as a director by YRF. When I made Love Story (1981), Amjad Khan was Gabbar Singh and I wanted to cast him for the role of a funny constable, people called me crazy but he fit the role. I was in the middle of shooting Arjun and I thought of removing Dimple Kapadia from the film...also shortened the runtime of the film, but my producers didn’t approve of this and even forced me to add more scenes," he shared. 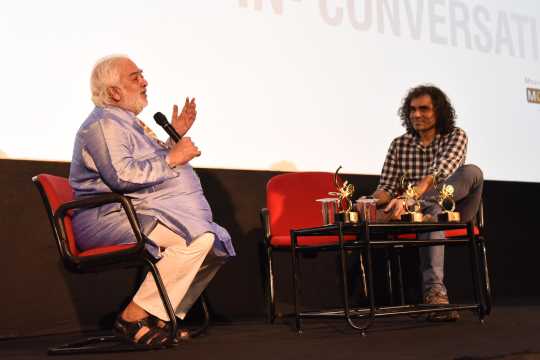 Director Imtiaz Ali said of his influences, “I got inspired to make films by filmmakers Rahul Rawail and JP Dutta since they were about travel. The reflection of their films is visible in my films. The background of the movie, Arjun, was very unconventional. In fact, in Pahalgam, there is a lake called Betaab valley on the name of the 1983 film.”

"It is said that cinema is inspirational, we say cinema lets you do whatever you can’t do in real life. Being a guy, I never cried and my mother used to call me heartless. Funnily, but on the other hand, my male protagonists have always cried in my films," Ali added.

He further stated, "A lot of people come to me and say that my films have broken the stereotypes of Karan Johar and YRF, but it is definitely not in my conscious. What I write in my scripts and show in my films, doesn’t mean I have seen that earlier."