I became an actor only accidentally: Nikhil Ratnaparkhi


Nikhil Ratnaparkhi speaks about his latest film Kulkarni Chaukatla Deshpande, his love for advertisements, and why he hardly visits theatres these days.

Nikhil Ratnaparkhi plays Avinash Deshpande in Gajendra Ahire’s Kulkarni Chaukatla Deshpande. In other words, the surname of his character is part of the title. However, the trailers and songs of the film, released over the past few weeks, have hardly shown him.

He did reveal, however, that his character is unusually funny: “I play Sai [Tamhankar]’s ex-husband. He is rich. He lives by his own principles and doesn’t care what others say. His principles are old-world and appear comical in today’s times. It was during the narration itself that I realized this is going to be fun. He doesn’t have any addiction or affairs and he doesn’t use cuss words.” 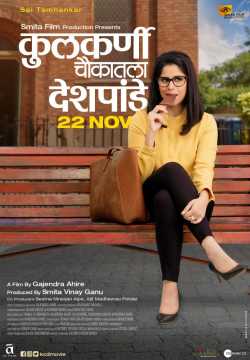 The film is about Jaya (Tamhankar) who divorces Avinash and falls in love with Satish (Rajesh Shringarpure). Jaya and Satish are both single parents, each with a son from an earlier marriage.

Hence, he always looks to play entertaining characters. “The character must be interesting and it should entertain the audience, irrespective of whether it’s in Marathi, Hindi or any other language. And if I get to do something different then it’s all the more better,” the actor said.

Interestingly, Ratnaparkhi was the first actor to play legendary humorist PL Deshpande in Gola Berij (2012). Recalling it, he said, “It was such an honour to play him. The thought itself makes you feel great.”

He might be busy with movies these days, but advertisements continue to attract him. Ratnaparkhi says he must have done up to 400 ads till date. “I feel the skill required in advertisements is unusual," he explained. "There is the timing factor. Here I get a chance to use my skills as you have to tell a story in seconds or even micro-seconds. Sometimes you have to show four or five expressions in two or three seconds.”

Asked about the current scenario in Marathi cinema, he said, “I hardly see new Marathi films, so I can’t give an opinion. But going by the trailers I keep watching, I feel the technicalities have become superb and newer subjects are being tried. They look interesting.”

Ratnaparkhi confessed that in the days of OTT platforms, he doesn’t find enough motivation to visit theatres regularly. “I feel there is too much effort to go to the theatres to watch a film," he said, echoing the thoughts of many cinema lovers. "Plus, there has to be someone with you as I don’t like going alone. Because of OTT platforms, watching a film has become so easy. I see a lot of films there, including Marathi.”