Romantic love is about the flesh: Bhaskar Hazarika on the hunger in Aamis


Director Bhaskar Hazarika speaks about the story of repressed love which emerged from a casual dinner and diverged into one of the more uniquely crafted thrillers of the year.

A love story that begins out of a shared fondness for meat soon descends into a series of terrible decisions compounded by the obsession of love. This would be a simpler but incomplete description of the complex, layered film that is Bhaskar Hazarika's Aamis.

The film, featuring Arghadeep Barua and Lima Das, was screened at the 21st MAMI Mumbai Film Festival in September, and is set for theatrical release on Friday 22 November.

The film marks Hazarika's second feature since the critically acclaimed National award-winner Kothanodi (2017). With its subtext about obsession, food habits,and biases, Aamis is as thought provoking as it is thrilling. No wonder it has found a supporter in Anurag Kashyap.

With the film approaching theatrical release, director Bhaskar Hazarika spoke to Cinestaan.com about the origin of the ravening (Aamis), the subtexts of the story, and the absurdity of its tale. Excerpts:

I read somewhere that the idea for the story of Aamis emerged from a casual dinner and watching people eat. Explain how that can be transformed into an almost philosophical exploration of love and food.

It actually came out of a casual dinner at a KFC outlet. This is not unique to this film or to me. You will find many other writers observing the world. This is one of the cases of me noticing this strange sight of two people eating chicken. It is not like I was interacting with them. They were eating quietly, and the idea took off.

The movie tackles love as a self-consuming obsession through the medium of food. How did you translate that from a written story to cinematic visuals. Was there any difficulty in doing so?

I think the meat in this film is used as a trope. It is about love and flesh. Romantic love is about the flesh. The initial idea was to see what happens to somebody who represses their desire for someone. When we used the trope of meat is that it leads her to become addicted to a flavour only in a human being.

The second part of the film is more about addiction than romance. Like any true addict, she manipulates him to help fulfil her addiciton. It is an unintended consequence of our repression, and desire.

It almost feels biblical in hindsight. One food item, and everything descends to hell....

It is interesting that some time back, when we were trying to get the film selected for a festival, the programmer made a similar comparison. I guess we can see the similarities there, but I was not really thinking of that. It was not part of the writing process anyway.

The film not only questions the repression of love, but also of food. In the way it almost philosophizes on the morality of eating meat. If chicken is food, then why not dog, and where do we draw the line? At a time when India lies divided into vegetarian and non-vegetarian, this becomes an interesting observation, and also risky. Was that a conscious choice to include the subtext?

Not at all. To be honest, if this idea had struck me in 2019, I would not have made the film. But this idea came around 2016-17, when this judgemental attitude towards meat did not exist. So, I was not thinking of a political subtext to it when I wrote it. The meat was simply symbolic of the love.

I do have issues with the vegetarian crusade happening. But if I had to make a film on it, this will not be the film. 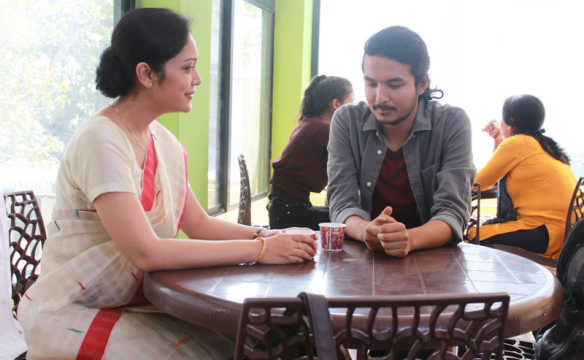 I suppose it is one of the absurdities that rise out of the film. The instance in the morgue is another example. The humour there is as absurd as it is frightening. How much is the theme of absurdity an influence in your work?

The more bizarre things get, the more interesting they can get. The idea is not to signal that we are going to show you something bizarre. It is to situate the bizarre into an everyday situation. The sequence of them walking past the morgue, when Arnali is persuading him to kill someone for her, everyone else is walking and talking around them; it is just another day. That is what makes the scene even more fascinating.

What were your influences in terms of style? Both Kothanodi and Aamis turn from the real to something horrifying.

I really try to stay away from watching films that can corrupt my thinking, when I am writing a film. For Kothanodi, I was influenced by the style of Japanese horror, and experimented. But for Aamis, I stayed away. It was just me sitting down and writing as though the story was happening in front of me.

I did read up on several instances of cannibalism during my research, and real life can be far more bizarre than any fiction.

Yes, it is bizarre that the movie forced me as well to look up instances of cannibalism during shipwrecks, the earliest trips to Antarctica, etc.

Yes, but those were out of survival. So, in a way, they could be justified. The real horror of it lies in ordinary situations. Like there was this guy in Germany who put up a Craigslist ad asking if anyone wants to taste human meat. The human mind is much like a monkey, you know. You really don't know what it is thinking.

Considering the narrative and the complexity of the subject, was it difficult pitching the story to production houses?

On the contrary, it was much smoother than Kothanodi for sure. The producer just loved the story in one narration, and once she was on board, it just fell into place. People sort of understood the story. I hope this happens again in my life.

Was there any trouble with the CBFC (Central Board of Film Certification), seeing how there is meat and a touch of cannibalism in the story?

Not at all. We had a screening and they were okay with it. They didn't suggest any cuts either. It is just a perception that we have. I think they have been pretty fair with my films so far.

Did the reception of the film at festivals abroad and in India surprise you?

I did not really know when we were making the film, but after we made the film people started talking about it. They said such a film had not been attempted in India. If I had known beforehand, I would have been much more cautious. That took us by surprise. But it was a good surprise. I hope it works at the box office as we go forward. 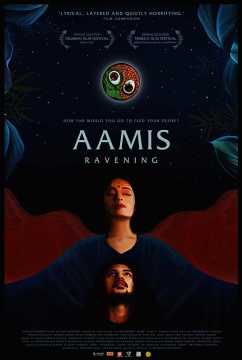 India does have a treasure of horror folk tales and legends. Yet, our cinema never really explores them, unlike Japanese or Korean cinema. Is that perhaps why this is a novelty?

I have so much to say about why we don't do enough horror in India! The thing is the fixation that to entertain someone we need to cater to their senses of happiness or pleasure. I keep saying to people that fear is such an amazing emotion to indulge in once in a while. You should never be scared of doing films on the subject of fear.

Of course, horror in India also has had a very bad rep for the last two decades. Whether it is the Ramsays, films were dismissed as B-grade cinema. Now, it is getting better. Perhaps that is why we didn't mine our folklore for more horror legends.

Food is a very crucial element of the film. Is it similar in your life and work?

Not really, I did not care about it much till I got married. My wife is a great cook, and she is a proper scientific chef. Even if it is an ordinary dal, she is very serious [about it]. It was only then that I started observing.

It is not an important part of my life. What is more important is to eat less (laughs).

There is a growing acceptance of films in different languages and sensibilities across the country. Rima Das, yourself, there is a growing influx of stories. What has changed for it to have such a pan-Indian reach?

Well, digital filmmaking has made things much cheaper for independent filmmakers. That is huge for us. The capacity to understand cinema is also increasing. We also have a very well-known film institute in the Northeast. It is churning out a lot of film graduates. There are also several film festivals taking place every year. There are so many stories out there, and there will be just more and more of it.

Any expectations of the upcoming release?

All I hope for is to recover the spending. That is all an indpendent filmmaker looks for, not even profits. So that I have a business case for my next film.