The actress-activist was given the MTV IWM Buzz award for Best Actress for the web-series, Kaafir.

Dia Mirza's first foray into a web-series has yielded great results for her. The actress played Kainaaz Akhtar, a Pakistani mother with a young child, who is imprisoned in India on the Zee5 web-series Kaafir, opposite actor Mohit Raina. 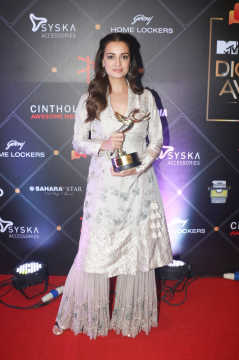 "I can never express enough gratitude to Zee 5, Bhavani Iyer and Siddharth Malhotra for writing this story, for expressing it the way they did, and to the entire team for giving me this opportunity," Mirza said in a statement.

"I want to also thank my wonderful co-stars Mohit Raina and little Dishita Jain who helped Kainaaz in this difficult yet rewarding journey. The message of Kaafir is that we are all one, we are all the same, which is the meaning of Ek Onkar, so there couldn’t have been a better day than Gurpurab to receive this award.

"Thank you to the MTV and IWM Buzz teams for recognizing me and giving me this honour. This is not my win. It’s #HumanityIsMyReligion's win," she said.

Inspired by a true story, Kaafir was premiered online in June.