Thalaivi, which is being directed by Vijay, will be made in Tamil, Hindi and Telugu. It has been titled Thalaivi in all three languages.

Thalaivi, biopic of the late film star-turned-Tamil Nadu chief minister J Jayalalithaa. starring Kangana Ranaut in the titular role, went on the floors in Chennai on Sunday, its makers announced in a statement.

Thalaivi, which is being directed by Vijay, will be made in Tamil, Hindi and Telugu. It has been titled Thalaivi in all three languages.

The entire cast of the biopic is yet to be revealed. However, it has been confirmed so far that actor Arvind Swamy has been signed to play the late Tamil Nadu chief minister and veteran actor MG Ramachandran aka MGR. 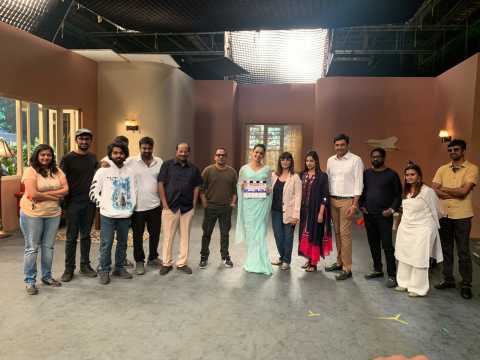 MGR played a very crucial role in the life and career of Jayalalithaa. Apparently, it was after a good deal of contemplation that the makers zeroed in on Arvind Swamy.

When the project was announced earlier this year with Ranaut, the choice of lead actress had received a backlash from fans on social media.

Vijay then clarified his stand on roping in Ranaut in an interview with The Times of India newspaper.

“This is a pan-India film, and Kangana is apt for the role," Vijay had told the paper at the time. "She is one of the biggest stars in India today and I think it is right that a top star plays the role of an important politician. This way, the story will also reach audiences across India. We consider this a pan-India film, not a regional one.”

The director also added that the decision to cast Ranaut was not made easily.

“There was a lot of discussion before the decision was made to cast Kangana," he continued. "We met several people. She is extremely excited about the project and wants to portray her [Jayalalithaa] with utmost honesty. She is learning Tamil for the film and will also be part of a one-month workshop to get into the character.”