The veteran actor looks back at one of his most popular characters as the Abbas-Mustan thriller completes 26 years.

Director duo Abbas-Mustan’s Baazigar (1993) became a turning point for Shah Rukh Khan. The anti-hero character in which he shone brightly played a big part in making the newcomer a star.

But every protagonist needs a powerful antagonist or villain to rise and this was the case with Baazigar as well. While the film had Khan as the protagonist, Dalip Tahil’s character Madan Chopra got enough importance to be remembered more than a quarter century after the film’s release.

Tahil was convincing as the evil conspirator who destroys the lives of Vishwanath Sharma (Anant Mahadevan), his wife (Rakhee) and their son Ajay (who grows up to become the character played by Khan).

On the 26th anniversary of Baazigar’s release today (the film hit theatres on 12 November 1993), Tahil revisited one of his most (in)famous characters.

The actor said he neither expected his character to become memorable nor the film to become the blockbuster it did because of the experimental nature of the subject. “People used to find the story about a hero who is a negative character and throws a girl from a terrace quite weird,” he said.

In fact, Baazigar struggled to find distributors because of its content. “After the trial screenings, distributors would come out of the theatre, say hurriedly ‘very good film’, and escape," the actor recalled. "They weren’t ready to take up the film because of the things the hero does.”

But one person remained unfazed by the reactions. “Shah Rukh trusted the film completely," said Tahil. "We were all shaken by these things, but he wasn’t. He was sure this film would do very well.”

Khan, in fact, had come on board the project after quite a few established actors had rejected the film, refusing to portray such a dark character.

Tahil credited the director duo with making his Madan Chopra memorable. “The character was written so well by Abbas-Mustan, [especially] the way he just destroys the entire family. The story made Madan Chopra so big that I consider myself fortunate to have done this role,” he said.

For those who came in late, Baazigar is the tale of Ajay Sharma's revenge on Chopra for destroying his family. Ajay gets his revenge but dies in the bargain, living up to the film's famous dialogue, "Haar kar jeetne wale ko Baazigar kehte hain [The one who wins by losing is the illusionist]." Kajol and Shilpa Shetty played Chopra’s daughters.

Tahil recalled that he got proof of Chopra's enduring fame in 2015. He was shooting at the time for the Hindi TV serial Siya Ke Ram in Hyderabad’s Ramoji Film City. One day he took a break and stepped out for a cup of tea. He was still in his getup of king Dasharath, the character he was playing in the serial.

“It’s a pain to remove the getup and put it on again," the veteran explained. "So, I was in the getup and sipping tea outside the studio. Tourists move around in those red buses there. People generally do not wait to see the shooting of a TV serial as it’s not considered great. But this one bus stopped.”

Tahil was surprised to see some people alight from the bus and point excitedly in his direction. “I looked behind, but there was nobody there. Then I thought maybe they had recognized me as Dasharath because the serial was also being aired in Telugu.”

So imagine his surprise when about a dozen people surrounded him, calling out 'Arre sir, Madan Chopra, Madan Chopra!' "I was stunned as I was sitting there in Dasharath’s getup and these people were calling me Madan Chopra (laughs). This shows how much the character had entered people’s minds,” he said.

Asked about the factors he considers before signing on for a film project, Tahil said, “If my presence in the film is not going to make any difference to the story, I don’t do it. If I feel the film won’t be made if I am not a part of it, then I surely do it. It doesn’t matter if the character is lead or villain. For example, I had just one scene with Amitabh Bachchan and Smita Patil in Ramesh Sippy’s Shakti (1982). I still did it as the scene changes the entire story of the film.”

Tahil went on to act in Sippy’s classic TV serial Buniyaad (1986), where he played Bhushan, the elder son of the family patriarch Haveliram (Alok Nath). 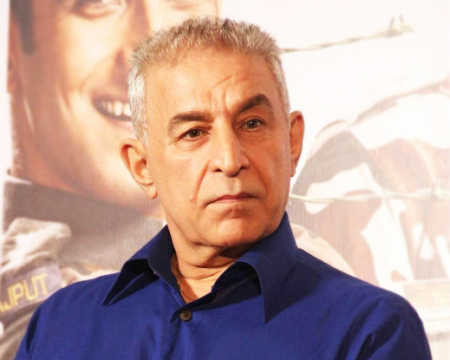 Tahil considers himself fortunate to have found work regularly in the film industry. “Films have come to me instead of the other way round," the veteran said. "I wasn’t sure how long I would get work. A lot of people are seen in three to five films and then disappear. I am fortunate to have been working for over 40 years and to have found such good directors at the start of my career. While working with them, I kept learning. They also had trust in me since I was from a theatre background.”

The actor had started working in theatre at the young age of 19 with legendary theatre personality Pearl Padamsee. He made his film debut with Shyam Benegal’s Ankur (1974). Recalling how he got the role, he said, “Shyambabu told me that if I am ready to cut my hair, he has a role for me.”

Tahil will now be seen in Kunal Kohli’s Ramayan where he plays the sage Vashishtha. After playing Dashrath and Vashishtha, the actor joked about what he would do if he gets to play Ravana some day. “I can play Ravana only by being Madan Chopra,” he said with a laugh.