Tipped to be a rural romantic comedy, the film features Anu Emmanuel and Aishwarya Rajesh as the leading ladies.

Actor Sivakarthikeyan’s next project with director Pandiraj had its official launch on Wednesday in the presence of the film’s cast and crew. The untitled film marks the third time collaboration of Siva and Pandiraj after Marina and Kedi Billa Killadi Ranga.

Currently dubbed as SK 16, the film is being bankrolled by Sun Pictures and through a series of posters they’ve announced the complete cast and crew.

Tipped to be a rural romantic comedy, the film features Anu Emmanuel and Aishwarya Rajesh as the leading ladies.

Last seen in Vishal’s Tamil crime thriller Thupparivaalan, Anu has signed a project after a brief hiatus. Aishwarya has already worked with Sivakarthikeyan in his production venture Kanaa (2018), in which she played a cricketer from a small village. 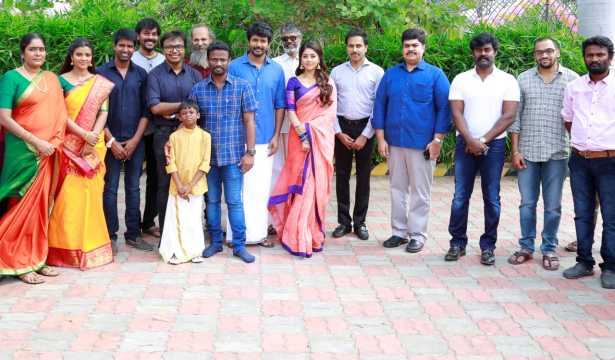 Pandiraj, whose last outing Kadai Kutty Singam was a runaway blockbuster, is planning on delivering a wholesome entertainer with this project which Sivakarthikeyan will simultaneously shoot with his other projects.

Meanwhile, Siva currently awaits the release of Mr.Local (2019), which releases later this month. It is believed to be inspired by Rajinikanth’s Mannan (1992), which featured Vijayashanti in a role quite similar to what Nayanthara plays in this film.

The film, which also stars Radhika, Yogi Babu, Sathish and Suman, has music by Hip-Hop Tamizha. It has been produced by Studio Green, which has joined hands with Siva for the first time.

Meanwhile, Sivakarthikeyan is currently shooting for his science-fiction film with Ramkumar. The untitled project also stars Rakul Preet Singh as an astronomer. Siva also has PS Mithran’s Hero (2019) in his kitty.