Siddharth Chandekar, Mrunmayee Deshpande team up for Miss U Mister

Siddharth Chandekar and Mrunmayee Deshpande have been paired together in the upcoming romantic Marathi film Miss U Mister. Presented by Mantra Vision in association with Third Eye Kreative Films, the film is directed by Sameer Joshi.

Describing the film, an official statement from the makers said, “Miss U Mister is a family entertainment revolving around relationships with a spice of surprises and twists added to the story.” The film also stars Rajan Bhise, Savita Prabhune, Avinash Narkar, Radhika Vidyasagar and others.

Speaking about the film and her role, Deshpande said in the statement, “I am playing the lead role of Kaaveri in the film representing today’s young generation. It is fun working with Siddharth who plays the lead character of [my] husband. The story is about how the couple copes with the challenges and complications that temporary separation brings into their lives. The relationship between the husband and wife has been subtly handled in the film, whose title itself is adequately suggestive about the storyline.” 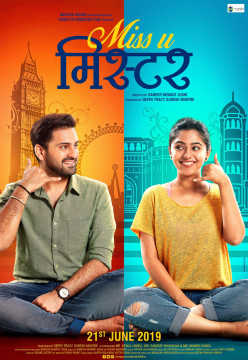 Deshpande’s last film appearance was in Mahesh Manjrekar’s Bhaai: Vyakti Kee Valli (2019), where she played a cameo of the first wife of PL Deshpande. Her last full-fledged role was in the recently released Netflix movie, 15 August (2019).

Chandekar is happy to be cast alongside Deshpande. “Mrunmayee and I have acted together in one act plays during our college days. I enjoyed working with her, a very talented actress indeed! I am playing the lead role of Varun in his film. What’s impressive about our director Sameer Joshi is that he gives full freedom to his actors. The production standards of the film are very high and I am sure that the audience too will like the film,” he said in an official statement,” he said in the statement.

Miss U Mister is scheduled for release on 21 June.