SOTY 2 actress Tara Sutaria: Thought I’d have only one film this year, now there are three!


VJ-turned-actress Tara Sutaria also revealed how she is the complete opposite of her Student Of The Year 2 co-star Ananya Panday.

Student Of The Year 2 is a rare film in which two new actresses are being launched together opposite a star like Tiger Shroff.

Asked if she had any apprehension about this, VJ-turned-actress Tara Sutaria said, “No, I don’t think there was any apprehension. I wouldn’t have liked to [make my] debut in any other way. The three of us make a super team. I can’t think of doing anything else with anyone because this has been the best experience ever.”

Sutaria has been doing plays since school and has had some television stints as well. But Student Of The Year 2 is a different ball game. “I have been performing my whole life, but this is a completely different world for me," Sutaria admitted. "A Dharma launch is just surreal. It’s been magical. Every day also felt like a little bit of a holiday because we were shooting in Mussoorie in beautiful locations.”

Directed by Punit Malhotra, the film is the second in the franchise after Student Of The Year (2012), which was the launch pad for Alia Bhatt, Varun Dhawan and Sidharth Malhotra. 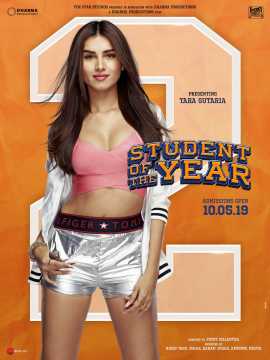 Asked how similar she is to fellow newcomer and co-star Ananya Panday, Sutaria said, “We are completely different in so many ways. She is outgoing and chatty. I am always reserved. I am always more to myself than she is. It was so nice to have her around all the time.

"We are like sisters in a way. We both have sisters. So we are new sisters in each other’s lives. She is just really easy and chilled out. When I get emotional or stressed, because that’s how I am, she has always been around to help.”

Alia Bhatt makes a guest appearance in a song in Student Of The Year 2. Named the ‘Hookup Song,’ Bhatt is seen matching steps with Shroff.

Going by the trailers, you would be hard put to find the college shown in Student Of The Year 2. When this was pointed out to Sutaria, she said, “I think it’s so cool that in the film we got to focus on things that generally in colleges you don’t focus on, like music, art forms and, of course, sports.”

The batchmates of Student Of The Year 2 have been meeting the batchmates of the first film but not in a formal way. “[It’s] not a deliberate meeting but we do see each other at events and parties. They are very excited. They have always said this,” said Sutaria.

Even before her debut film is released, the actress has already shot for her next, Marjaavaan (2019), and has a third lined up in the form of the Hindi remake of the Telugu hit RX 100.

Sutaria considers herself fortunate. “I don’t think this happens very often to a lot of people," she said. "It really makes you feel blessed and grateful. I had thought one film this year would be huge, but now there are three!”