The actor admitted that he is 'in remission' and awaiting a bone marrow transplant to completely be free of the illness.

After being pronounced 'cancer free', actor Rishi Kapoor credited wife Neetu Singh Kapoor, son Ranbir and daughter Riddhima Kapoor Sahni for standing by him as his support system. The actor moved to the United States in September 2018. However, it wasn't till later in the year that rumours of his cancer broke in the news.

Earlier this week, director Rahul Rawail, close friend of the Kapoors, posted the news of the actor being 'cancer free,' following which Rishi spoke to Deccan Chronicle updating the news of his health.

"My eighth month of treatment started on 1 May in the US. But God has been kind! I am in remission, meaning now I am cancer-free," the actor said.

Thanking his fans for their prayers, Rishi added,"Being in remission is a big thing and it’s all because of my family and my fans prayers and duas [prayers] that have worked. I thank them all."

A self-confessed foodie, Rishi also said that it was his wife, actress Neetu, who stood by him 'like a rock' as the family faced the disease. "Neetu has stood by me like a rock. Otherwise I am too difficult a person to handle as far as food and drink is concerned."

Evidently, the illness has also brought Rishi closer to his son Ranbir and daughter Riddhima. In the report, Rishi thanked his children for 'shouldering the responsibilities', while he recuperated. He said, "My kids Ranbir and Ridhima have really shouldered my problems."

Rishi is the latest of a long list of actors from the Hindi film industry who have come out with their battle with cancer. Another survivor, Sonali Bendre was among Rishi's visitors in the United States of America as he recuperated. The actress was in the country herself for treatment, and announced being in remission only a couple of months ago. 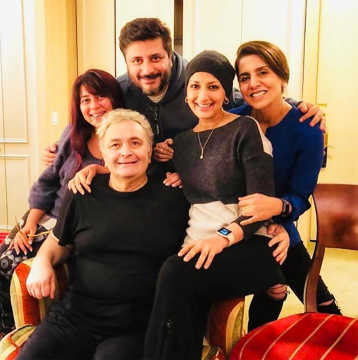 Rishi also admitted that the slow recovery time has taught him 'patience'. He said, "A person like me who has never had patience, this is God’s way to teach me patience. Getting well is a slow procedure. But it makes you grateful for the gift of life."