Having briefly dated each other and after working together in Vaalu (2015), this will be the second time that Simbu and Hansika will be seen together in a film.

Actor Simbu, who plays an extended cameo in Hansika Motwani’s upcoming Tamil thriller Maha (2015), will be seen as a pilot, according to director UR Jameel. Simbu is currently shooting for his portion in Goa along with Hansika.

Talking to the newspaper Times of India, Jameel said that Simbu will be seen in the film for about 45 minutes.

“It is an extended cameo. He will appear in a song and in an action sequence. He plays a pilot in the film and has almost 30-45 minutes of screen time. We began shooting his portions from Sunday, 26 May, in Goa,” Jameel said, and added that they hope to wrap up his portion by first week of June. 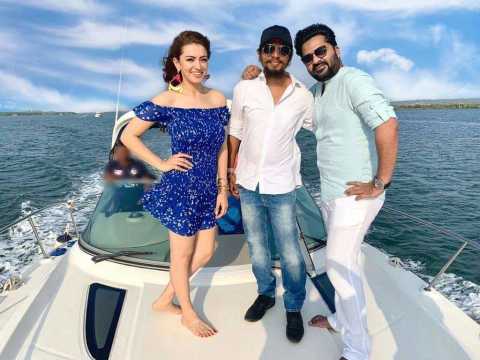 Having briefly dated each other and after working together in Vaalu (2015), this will be the second time that Simbu and Hansika will be seen together in a film.

Tipped to be a woman-centric thriller featuring Hansika in the titular role, Maha also stars Karunakaran, Srikanth and Thambi Ramaiah in crucial roles.

Talking about the film, Jameel said in a statement: “Her decision to elevate herself to heroine based films will justify the rich talent she possesses.  Hansika plays a very challenging role that has multiple shades. The mirror image which went viral yesterday actually says, 'The objects in the mirror are not what exactly what you see....It differs'. Hansika’s character is built on this concept.”

Maha has music by M Ghibran and this happens to be his 25th film. Predominant portion of the film will be shot in the East Coast Road (ECR) stretch in Chennai and Madurai. The makers also plan to shoot some scenes in a European country.