Here is why Jaani Dushman (1979) was a pioneering film


On the 40th anniversary of the release of Rajkumar Kohli's macabre multi-starrer, we take a look at the unlikely elements that came together, including a future Oscar-winner, to create this hit.

In 1979, horror was not a genre a commercial Hindi filmmaker was interested in. Even after the surprising successes of Mahal (1949), Bees Saal Baad (1962) and Woh Kaun Thi? (1964), horror was usually treated as a stepchild of Hindi cinema, left mostly to the Ramsays with their ready-mix formulae.

That is why Rajkumar Kohli’s Jaani Dushman (1979) stands out, for the success brought about by a combination of A-list artistes, a rooted, rustic legend, some retro music, and a very good crew, including an Oscar-winning costume designer. 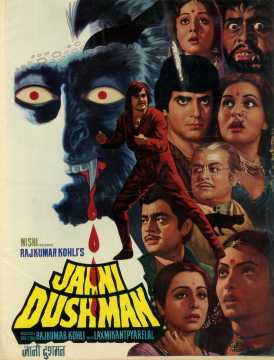 If the star cast boggles the mind, as it did even in those heydays of multi-starrer movies, the story will do you further harm. Kohli set the film around a village fable about a monster that abducts brides on their wedding day.

Jwala (the monster) has been terrifying a little village for decades. This sets up the context for a confounding hexagon of romantic stories, primary of which is the track of Lakhan (Sunil Dutt) and Reshma (Reena Roy).

But there is Shera (Shatrughan Sinha), son of the village Thakur (who else but Sanjeev Kumar?), who covets Reshma (Reshma Aur Shera was also the title of a Sunil Dutt film at the beginning of the 1970s).

Shera is loved by the village belle Champa (Rekha) while the Thakur’s daughter Shanti (Bindiya Goswami) loves Lakhan. And this is apart from the creepy temple priest (Premnath), the police inspector pretending to be a mad man (Vinod Mehra), and the two lovebirds (Jeetendra and Neetu Singh) who stumble into the village on a trip.

As all these characters squabble and quarrel, the ever-present threat of the monster looms large. In the end, of course, all the ‘avengers’ assemble to unmask the monster and end his reign of terror.

But it might not be right to dismiss the story as juvenile. Kohli’s instinct to choose a rustic Indian folklore seems to be the formula even today. As director Krishna DK said at the International Film Festival of India (IFFI) in Goa last year, “A Tumbbad (2018), a Stree (2018) remind you of your small town, growing up there, and the people around telling you these legends. This makes the films more relatable.”

Stree itself was based on a legend in a region of Karnataka of ‘naale ba’, or 'come tomorrow', a phrase written on doorways to ward off a witch that supposedly haunted the place.

Kohli paired his demon tale with a multi-star cast and a wonderful crew. Jaani Dushman is, perhaps, the only Indian horror film to have had a future Academy award-winner on its roster. Designer Bhanu Athaiya was in charge of the costumes department. She went on to win the Oscar for her work on Richard Attenborough’s Gandhi (1982).

Mangesh Desai was in charge of the sound design. Inder Raj Anand brought out the flair in the dialogues, and B Gupta was in charge of special effects. The highest paid composers of the era, Laxmikant-Pyarelal, were tasked with providing the musical score.

And they did so to good effect. Two of the film’s songs — 'Chalo Re Doli Uthao' and 'Oh Meri Jaan' — went on to be featured on the Binaca Geetmala radio countdown show, the hallmark of popularity for Hindi film music back then. The first song even got Mohammed Rafi a Filmfare nomination for Best Playback Singer.

On watching Jaani Dushman today, Kohli’s film comes across as filled with clichés, raw, and accidentally humorous. However, the plot is woven well. While the settings and production design might be tacky, the film has enough substance in the plot to keep the viewer interested. In fact, the mystery of the demon's identity and the denouement of the film are managed rather well.

The revelation of the monster also arrives at a key point, and, to be fair, the makeup is far better than what the Ramsays used to manage. Perhaps that was a function of Kohli's budget for the project.

In 1979, Jaani Dushman proved to be enormously popular with cine-goers though the film was rated A (for adults only). It did impressive business at the box office (second only to Yash Chopra's Kaala Patthar) and went on to become a cult favourite with the arrival of the videocassette in the early 1980s and the VCD the following decade.

To put things into context, the same year Hindi cinema also saw Gol Maal, Baton Baton Mein, Suhaag and Mr Natwarlal. Of all the hits of the year, Jaani Dushman stands out as an oddball. But as Manmohan Desai and Prakash Mehra had already proved, oddballs have their own appeal for the masses.

The film was Kohli’s last hurrah. While he kept trying different formulae for commercial success, he never tasted it on this scale again. The director then tried to revive the legend in 2002 with son Armaan Kohli playing the villain in Jaani Dushman: Ek Anokhi Kahani.

Kohli used every element from The Terminator (1984) to The Matrix (1999) in an attempt to make the story 'hip'. But what the film missed was the authentic flavour of the original tale. The focus on special effects and razzmatazz found no takers among audiences or critics and the film ended up a meme fountain.

Through the 2000s, apart from Vikram Bhatt, there have been few directors willing to experiment with horror. Even Bhatt chose to hedge his bets by casting Emraan Hashmi, an unconventional star, to keep the production cost low.

The success of Stree was a sign of change. Since then, Tumbbad and the upcoming slew of horror-comedies like Rooh Afza (2020), Stree 2 (2020), Bhoot Police (2020) and Laxmmi Bomb (2020) have pulled actors like Rajkummar Rao, Saif Ali Khan and Akshay Kumar towards the genre.

The interest in the genre is back, but as Raj Nidimoru said at IFFI 2018, “The demand [for horror] is legitimate, there is nothing unnatural about it. The demand will always be there. But the onus is on us not to repeat it."

Rajkumar Kohli's Jaani Dushman (1979) could not be repeated. Evidently, not even by the filmmaker himself.