While one poster features Jyotika standing atop a jeep, the other one has Jyotika and Revathy sport police uniform.

Actresses Jyotika and Revathy recently completed shooting for an action comedy, directed by S Kalyan. On the occasion of May Day, the makers unveiled the film’s title as Jackpot along with the first look posters.

While one poster features Jyotika standing atop a jeep, the other one has Jyotika and Revathy sport police uniform.

The film, which had its customary launch in February, also features veteran actress-filmmaker Revathy along with Yogi Babu and Anandraj.

The film, produced by actor Suriya’s 2D Entertainment, has music by Vishal Chandrasekhar and has been planned as a summer release.

Jyotika, who was last seen playing a hapless housewife chasing her dreams to be independent in Kaatrin Mozhi (2018), has managed to complete shooting for two projects in quick succession. Her other project, in which she plays a school teacher, with debutant director S Raj has also been completed recently. 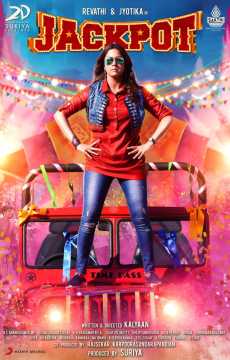 According to a statement released by the makers, recently a school set worth Rs50 lakh was erected in Chennai where most of the shooting took place.

The project will also star Poornima Bhagyaraj, Sathyan, Hareesh Peradi and Kavitha Bharathi among other actors. Sean Roldan has been roped in to take care of music, while Gokul Benoy will be behind the camera.

Meanwhile, Jyotika last week commenced shooting for an untitled Tamil film with her brother-in-law Karthi in the direction of Jeethu Joseph.

The regular shooting has started in Goa. This film features Karthi and Jyothika, who are sharing screen space for the first time, as siblings.